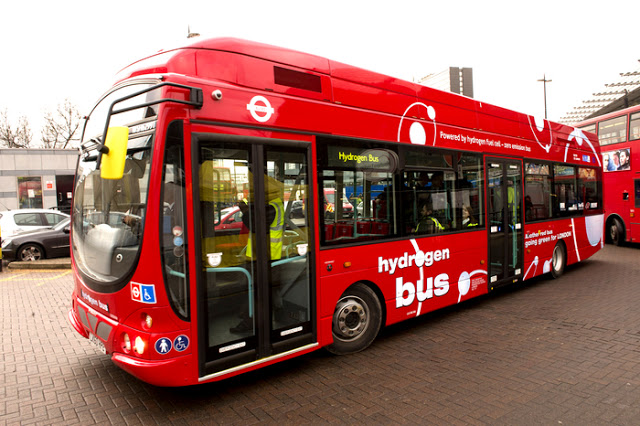 The Met Office – the UK’s leading weather service – announced back in January that CO2 levels in the atmosphere look set to rise exponentially in 2019, meaning the need to offset our emissions is becoming increasingly urgent. According to the European Commission, transport is the main cause of air pollution in cities and currently accounts for a quarter of Europe’s greenhouse gases, making it one of the main sustainability topics to tackle. From electric cars to hydrogen powered buses, here’s the latest green transport news to have on your radar.

Initial drawings of Dyson’s electric car have recently been released, giving the public a very rough idea of what they might expect from this revolutionary vehicle. Known for its radical redesign of the humble vacuum cleaner, the British business has now turned its attention to creating a car that doesn’t rely on fossil fuels to run. Those who were expecting a spaceship like design might have been disappointed – the patents reveal a model that bears much resemblance to any other car on first inspection. However, in an email to staff, Sir James Dyson (the founder) explained that the patents “don’t reveal what our vehicle will really look like”, meaning the public will most likely have to wait for its release in 2021 to get a real idea of what it can do.

Friends of the Earth appeal against Heathrow expansion

Sustainability charity Friends of the Earth has announced that it will be appealing against the recent High Court decision to dismiss a climate case against Heathrow’s third runway plans. The High Court made the decision after finding the government’s case to be ‘legal.’ The appeal will focus on the fact that the British government has failed to fully consider the environmental consequences of building a third runway in the first place.

“Expanding Heathrow is wrong on every level and we can’t let it go,” Craig Bennett – Friends of the Earth’s Chief Executive – said of the resolve. “I could not sleep at night if Friends of the Earth did not challenge this decision. We are going to appeal because we believe the Court got it wrong.

“We are in an ecological and climate emergency and parliament have supported an outdated decision to chase climate-wrecking development.” The issue at the heart of this case is the morality behind allowing such a development and the pressure is now on for the charity’s legal team to find away to undercut the judgement in a way that still honours the law.

After several protests swept through London over recent weeks, Members of Parliament have now declared the UK to be in a state of climate and environment emergency. This comes as a result of pressure from both the public and Labour leader Jeremy Corbyn, who acknowledged it as a ‘huge step forward’ in the UK’s efforts to actively address the climate change issues it is facing.

Though there isn’t a single definition of what a climate emergency is, this new state has compelled many local councils to reduce to pledge carbon emission reductions and more sustainable town planning. On an international scale, it could have a big impact on Heathrow’s expansion plans and encourage other countries to commit more openly to solving the sustainability crisis.

Hydrogen powered buses to be introduced in London

More news from the UK capital – Transport for London has announced that it will be introducing 20 new ‘zero emission’ buses across three routes over the next year. These hydrogen powered buses will be the first of their kind in the world and are a first step in the bid to tackle the city’s poor air quality. This now forms the largest zero-emissions bus fleet in Europe and gives commuters a glimpse into what travel across London will look like in a few years. The routes currently scheduled to benefit are number 7, N7 and the 245.

The Royal Bank of Scotland has become the latest global company to sign up to the Climate Group’s EV100 initiative, which encourages large businesses to switch to electric transport. The bank has pledged to switch 300 of its vehicles to electric ones and upscale charging points across its facilities. This is the latest in a series of sustainability pledges that RBS has made, which includes ensuring all its UK buildings are using renewable electricity. The EV100 initiative released its first report in February, which stated that it is on target to save over 6.6 million tonnes of CO2 emissions by 2030 – the equivalent carbon footprint of 1.9 million UK households.