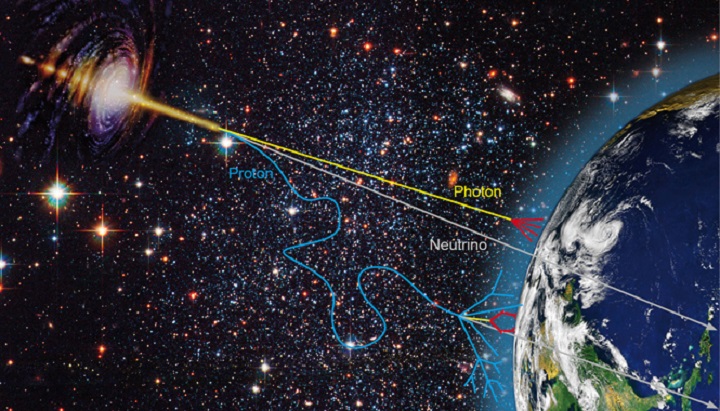 Cosmic rays are high-energy protons and atomic nuclei which move through space at nearly the speed of light. They originate from the sun, from outside of the solar system, or even from distant galaxies.

The remnants of self-destructing stars can accelerate particles to higher energies than world’s most powerful accelerator.

It’s a cosmic whodunnit that has been puzzling astronomers for 100 years. What is shooting protons through our Galaxy at energies up to thousands of times greater than those in the Large Hadron Collider at CERN near Geneva, the most powerful particle accelerator on Earth? Two new sets of observations again implicate the leading suspects: supernova remnants, the expanding shrapnel from stellar explosions. But they may not be the only culprits.

Protons make up about 90% of the high-energy charged particles, or cosmic rays, that constantly rain down on Earth. But directly tracing their origin has been impossible because magnetic fields threading through the Galaxy push the charged particles off their original paths.

Nevertheless, astronomers have long assumed that supernova remnants act as the Galaxy’s particle accelerators. That is because the expanding stellar debris creates a shockwave when it slams into the surrounding gas, compressing and enhancing any magnetic fields present. Charged particles traveling through the shock front can get accelerated, and some also get deflected back by the magnetic fields. Some particles may travel back and forth across the front — and gain energy — for thousands of years before escaping as cosmic rays.