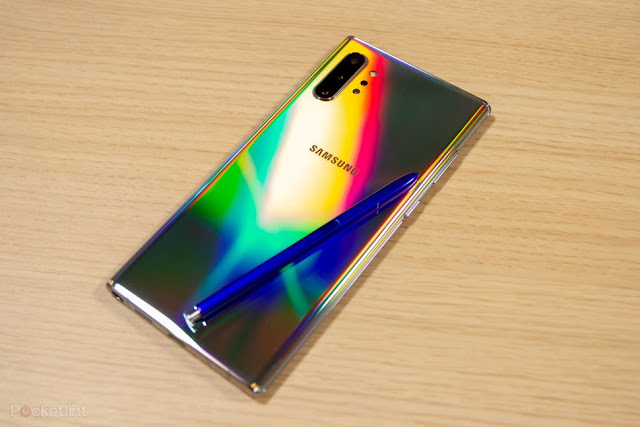 The Galaxy Note has always been something of an individual. It was this family of phones that Samsung really used to push new technologies – not just the S Pen, but curved screens, big displays, and more cameras.

Until recently.
In recent years the gap between Galaxy S and Galaxy Note has closed, with this, the Note 10 is available in two sizes – the Note 10 and the larger Note 10+.
The Samsung Galaxy Note 10+ is the lead device, carrying a few additional features over the smaller model – but is it still as ground-breaking as it once was?

Samsung hasn’t been particularly aggressive with colors in recent years. Changing the color of the S Pen on the Galaxy Note 9 – pairing blue and yellow – was about as edgy as things got. That’s changed with the Note 10+ where the Aura Glow model takes the lead.
Samsung has created a color effect for the rear that’s hard to describe. It shimmers and explodes with color when light hits it, like a holographic silver. It looks different pretty much every time you look at it and we’re really taken by it. 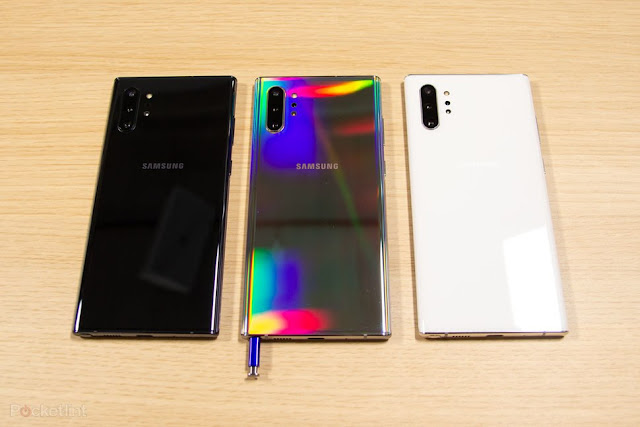 It’s an obvious thumbing of the nose at Huawei, a company that has dazzled with an array of finishes over the last couple of years – also boosted by the removal of the fingerprint scanner and a new integrated ultrasonic scanner under the display.
The Galaxy Note 10+ is glass and metal, with IP68 water and dust protection, just as you’d expect. It’s still a rather square-faced phone, curving less in the corners than the Galaxy S, but still with that Infinity Display.
Here it’s Infinity-O, with a central punch-hole selfie camera, but the thing you’ll notice is that Samsung continues to push back the bezel for more of a full-screen experience.

The S Pen is what defines the Note. Remove the S Pen and you might as well get the Galaxy S. Like the Note 9, the new Note 10 has an S Pen that connects using Bluetooth low energy and opening up a range of new functions.
Firstly, the S Pen is now a unibody design and has shifted battery technology, meaning that it will get 10 hours of use from a charge – and it charges inductively within the body of the Note 10+. 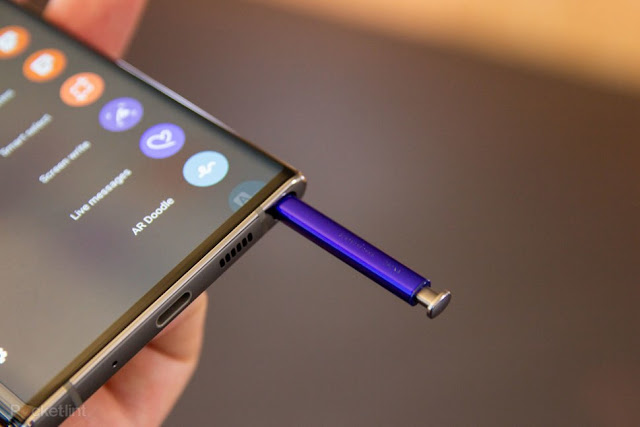 Let’s start with the writing experience. The S Pen has a new option when it comes to converting handwriting into text. It will automatically recognize what you’ve written and give you a range of export options from Samsung Notes – including moving straight to PDF or as a Word document.
Samsung is positioning the Note 10+ as a productivity device with deeper support for Microsoft services, as well as offering DeX on an external monitor – but the ability to save your scrawls as legible Word documents is great.
Beyond that, you can also pinch-zoom in Notes, or change the style of your writing once done – giving you more flexibility. 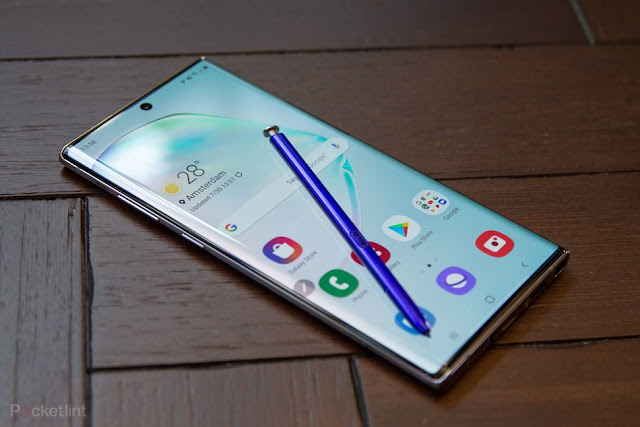 Moving away from writing, the S Pen still offers all those shortcuts and functions that it did previously, but there’s now a range of enhanced control options offered too. Previously these covered play and pause, presentations and taking photos, but there’s now more it can do.
You’ll be able to use Air Gestures, holding the button and moving the S Pen a bit like Harry Potter and his wand. That will mean you can do things like zoom remotely with a spiral of the S Pen, or swipe to different modes in the camera.
That’s all great, but it’s also something we’ve not had the chance to fully explore – and it does raise some questions. We can see the value in remotely running a slideshow from a phone connected to a projector or something, but the number of times you’ll be needing remote control of your phone for taking photos… it feels rather a niche.
It’s clever for sure, but it feels like it’s a feature that needs developer support to take advantage of it and really come up with good reasons for it to exist.

Hardware and a nod towards gaming

The setup of the hardware will be familiar with Samsung fans. Some regions will get Qualcomm hardware and some will get Exynos. As far as we understand it, Europe will get Exynos and there will be the option for 5G on the Note 10+ only – but that might be different in other global regions.
There’s a generous 12GB RAM and big storage options starting at 256GB – with microSD support – something that the smaller Note 10 isn’t going to offer.
We’ve not had the chance to fully test the Note 10+’s performance and that means we can’t assess how long the 4300mAh battery will last. Although it will support 45W charging, that charger won’t come as standard, you’ll have to buy it separately, which no one will do, so it’s a bit of an empty gesture. 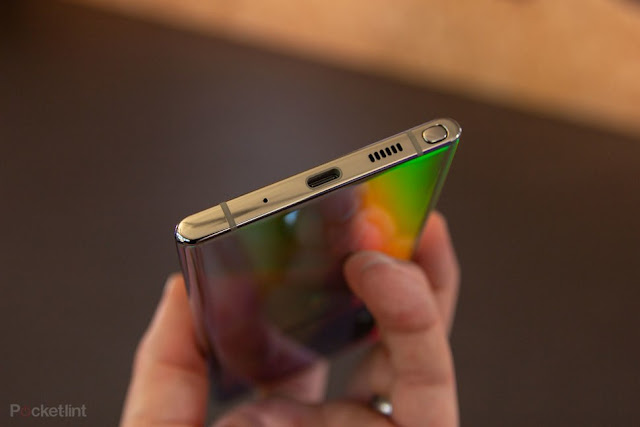 With a nod to gaming, Samsung is revamping the game mode experience slightly, bringing in AI to detect what you need and make sure the performance is appropriate for the game you’re playing. This should scale things down for a simple game like Candy Crush, but ramp them up for a game like PUBG Mobile.
To keep things cool there’s a special vapor chamber built into the middle of the phone and there’s also an enhanced screen recording feature. This will give you on-screen controls to record your gaming (or anything else), and you can even include yourself in that video using the front camera.

Screen recording will also let you choose the resolution of capture and the audio, so you can include the mic for voiceover or just the game sound for example.

The big display is everything you expect from Samsung. It’s rich and punchy in colors, stretching over those edges and now pushing back bezels top and bottom too. That’s very much the trend for 2019 and moving to the Infinity-O design helps meet these aims.
Sure, there’s a camera-top center and it’s less intrusive than the double front camera of the Galaxy S10+, but does avoid having a notch or a weird pop-up arrangement – and having used a number of punch-hole devices, we don’t have a problem with this solution.

Of course, one consideration is often the curve. You can’t really use the S Pen on a curved surface and most previous devices have had some touch limitations going over the edges – that tiny icon you might want to tap during the game might not be accessible.
We’ve not tested this phone to its full in those conditions yet, but first impressions are that this is going to be a great display and a great phone for entertainment. With that in mind, there’s HDR support, as well as AKG-tuned speakers offering Dolby Atmos for immersive audio.

Let’s look at the cameras

The set-up of the cameras on the Galaxy Note 10+ is basically the same as that of the Samsung Galaxy S10 5G, with three main lenses and a fourth for depth sensing. There’s a rearrangement in the design and we can’t help feeling that the Note 10+ is a little neater than the Cylon bar of the 5G phone. Moving some of the sensors out into a separate area looks tidier, even if it now looks like a Huawei phone.
We’ve not had the chance to test these cameras extensively, but Samsung has been fairly consistent in its offering over the past few years. The main dual aperture camera we expect to be great in most conditions with reasonable HDR treatment and so on.

Zoom and that ultra-wide angle – as seen on the Galaxy S10+ – are useful additions meaning there’s nothing really missing from the setup – although we didn’t have the chance to look at night shooting or low light performance in any measure.
What’s perhaps more interesting is that Samsung has only put a single camera on the front of the Note 10+ – and made it smaller. With dual cameras on the front of the S10 5G and the S10+, we get the feeling that Samsung has now decided that it’s perhaps too intrusive.
We’ve mentioned the support for the S Pen in the camera – but there’s also a range of new video features too. One of the things that the S10 5G offered was “live focus video”, which is basically like portrait mode for video, blurring the background. On the Note 10+ you can use this to apply effects – just like you can with portrait mode/live focus on the front camera. 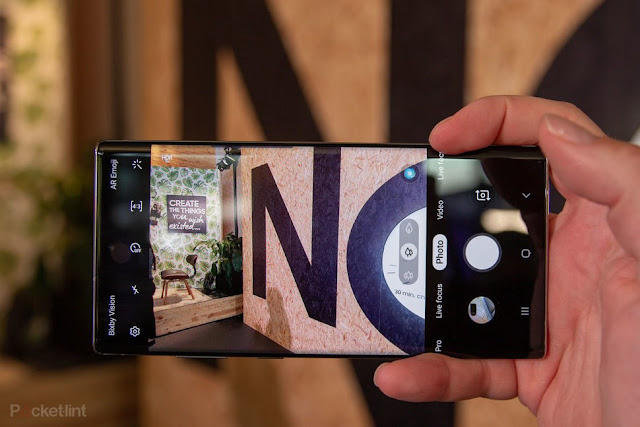 One of the nice things here is that it’s not just blurs, there’s also a sort of Stranger Things-style anaglyph distortion you can apply. It’s a bit of fun but makes the valid point that once you’ve got depth information for a scene, you can basically do what you want with the background.
If you’re a fan of AR in your camera – and who isn’t? – there’s an AR doodle option that will let you draw on a video and have those doodles move with the subject. For example, you can draw a pair of glasses on someone and they’ll stay in position as they move around. Great fun! There’s also a really good effect that will let you overlay effects and zoom through them. 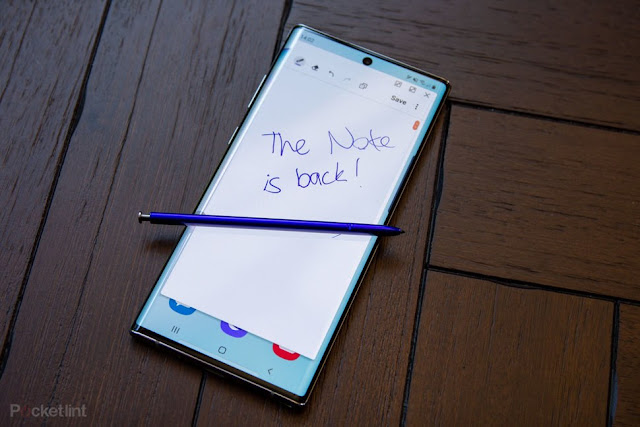 What all this leads up to is Samsung positioning the Note 10+ as a phone for creators. The S Pen remote means you can, potentially, have a lot of control when you’re not holding the phone, while there will also be on-board editing functions for video, the ability to zoom the microphone and support for Adobe Rush if you want a little more.

First Impressions
Let’s be honest: there’s a lot about the Note 10+ that’s incremental. It pulls on the Galaxy S10+ and the S10 5G and boosts the offering with a couple of additions. If you’ve got either of those phones then the Note 10+ is basically the same thing.

For Note owners, again, there are incremental changes from the previous versions of this phone – and if you’re still hanging on to the Note 8, then there are lots that will appeal with more power and functions, even if the software experience is still very close.
But the dilemma is now more difficult: with a smaller Note 10 option, you can have the S Pen experience on a cheaper and more pocketable device. While it might not do everything that the Note 10+ does, it’s still an interesting addition to the range. The S Pen remains the star of the show – the thing that makes this phone different from Samsung’s other 2019 devices.
Pre-orders on the Samsung Galaxy Note 10+ are now open and it will be on general release from 23 August 2019.