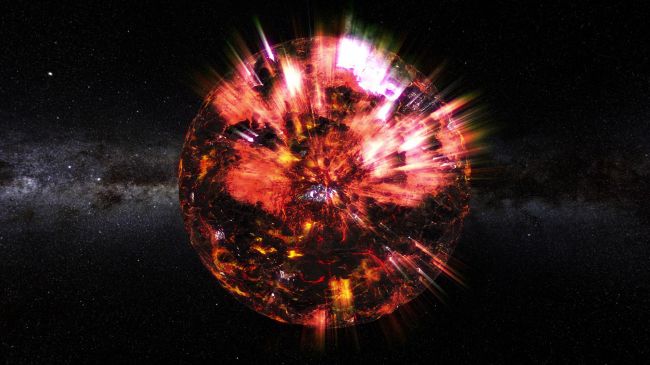 The universe is filled with almost incomprehensibly bizarre phenomena, but astronomers may be a step closer to understanding the life cycle of stars. Astronomers observing a distant star system have identified what may be the most massive neutron star ever discovered. it’s so massive — about 2.14 times the mass of our sun packed into a sphere most likely around 12.4 miles (20 kilometers) across — that it’s near the limit of being able to exist at all.

A spinning cosmic cadaver is all that’s left of a weighty star hovering some 4,600 light-years from Earth after having undergone an explosive death. Now, astronomers have found that this corpse is the most massive neutron star ever discovered.

This neutron star, called J0740+6620, emits beacons of radio waves and spins at a dizzying 289 times a second, making it a pulsar. The new estimate for the pulsar’s mass makes it heftier than the previous record-holder — a spinning neutron star weighing in at about 2.01 times the mass of the sun, said lead author Thankful Cromartie, a graduate student at the University of Virginia. Figuring out the new record holder’s mass “was absolutely thrilling,” she added.

Some other studies have pointed to neutron stars that might be 2.4 or 2.5 solar masses, but they weren’t measured as accurately as this one. We don’t know exactly how massive neutron stars can get, but we’ve never spotted a black hole less than five solar masses. What happens in between is still a mystery, but studying J0740+6620 could shed light on how stars live and die.

The scientists spotted the opportunity to study the stellar corpse in data collected by radio telescopes at the Green Bank Observatory and the Arecibo Observatory. The data came from a collaboration called the North American Nanohertz Observatory for Gravitational Waves, or NANOGrav, with the goal of observing a bunch of these fast-spinning pulsars all across the sky.