If you’ve ever dreamed of time traveling, just look out at the night sky; the glimmers you see are really snapshots of the distant past. That’s because those stars, planets and galaxies are so far away that the light from even the closest ones can take tens of thousands of years to reach Earth , and some of those stars are already dead .

The universe is undoubtedly a big place. But just how big is it?

In the third century B.C., Aristarchus of Samos asked the question ‘How far away is the Moon?’ He was able to measure the distance by looking at the shadow of the Earth on the Moon during a lunar eclipse.

In 2013, the European Space Agency’s Planck space mission released the most accurate and detailed map ever map of the universe’s oldest light. The map revealed that the universe is 13.8 billion years old. Planck calculated the age by studying the cosmic microwave background.

Scientists measure the size of the universe in a myriad of different ways. They can measure the waves from the early universe, known as baryonic acoustic oscillations, that fill the cosmic microwave background. They can also use standard candles, such as type 1A supernovae, to measure distances. However, these different methods of measuring distances can provide answers.

The size of the universe depends a great deal on its shape. Scientists have predicted the possibility that the universe might be closed like a sphere, infinite and negatively curved like a saddle, or flat and infinite.

According to NASA, scientists know that the universe is flat with only about a 0.4 percent margin of error (as of 2013). And that could change our understanding of just how big the universe is.

Astronomers have used Hubble to observe Cepheids with extraordinary results. The Cepheids have then been used as stepping-stones to make distance measurements for supernovae, which have, in turn, given a measure for the scale of the Universe.

Today we are fairly confident that the Milky Way is probably between 100,000 and 150,000 light years across. The observable Universe is, of course, much larger. According to current thinking it is about 93 billion light years in diameter. 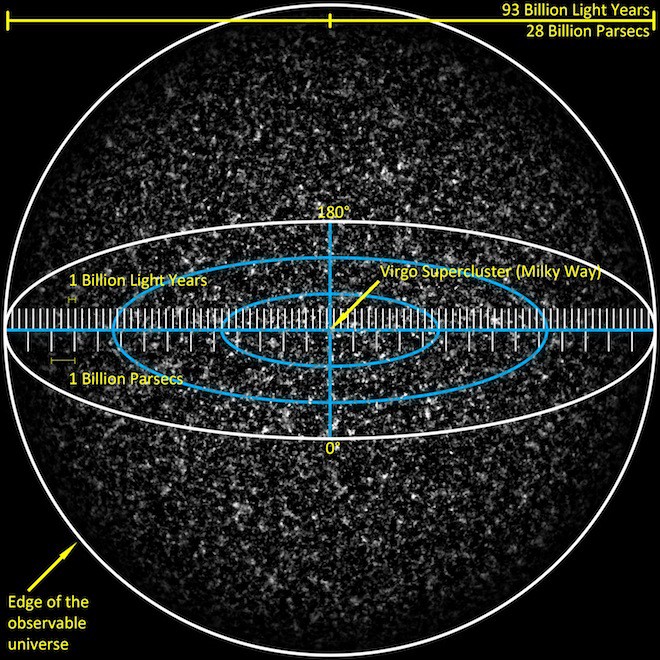