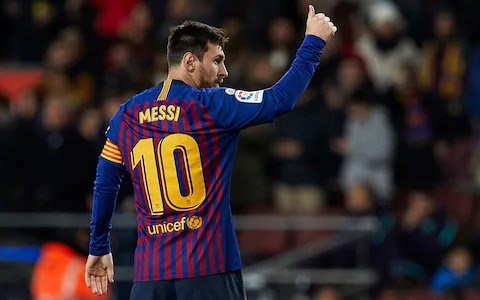 Lionel Messi, Barcelona star and captain, has rejected the advice of Portuguese international Cristiano Ronaldo to leave the Barcelona.

In an interview with the newspaper “Marca” Madrid, Messi reviewed the characteristics of his teammate Frinky de Jong and Liverpool defender Virgil van Dyke, stressing that he was not surprised by the strength of Inter Milan with coach Antonio Conte.

Some of the interview’s dialogue :

– Cristiano Ronaldo and Ibrahimovic defend themselves, while you do not?
I prefer people to talk about me, I know who I am, what I have done and what I can offer, but I keep it to myself, and the masses can have their say. I don’t like to talk about myself, but about the group.

– Do you see yourself over time evolving into a midfielder?
I don’t know, it depends on how things work, and now I usually go deep into the field to get the ball, and link the play to the midfield, and I don’t know what will happen in the future.

– What are the best qualities of De Jong, and how do you understand him on the pitch?
It was easy for him to adapt to the team, because he came from a similar philosophy in Ajax, where he grew up with the same thought and style of play … He likes to own the ball and make short passes, and between lines, he is an integrated football player.

– Ronaldo always recommends you to leave Barcelona and look for titles in other leagues as he did, what do you think about this?
Everyone was looking for their goals and experiences, I never needed to leave the best club in the world, Barcelona, where I enjoy training, matches, the city, and the dynamics of the club is very complete.
I was always sure to achieve goals in this club, rather than looking for them in any other club.

– Although you won everything but the Puskas prize eluded you, how do you see it?
I always say that individual awards are not my goal, be it the best or the golden ball or the golden shoe.
The best goal of the year (Puskas), if i get it is fine, and if the opposite happens everything is fine.

-What do you think of the goal of Daniel Zuri, who won the Puskas Award this year?
It was a very good goal, with a high shot in the air.