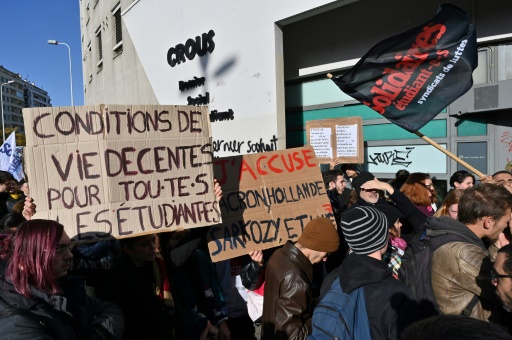 a 22-year-old – named in some French media as Anas K – is said to be “between life and death” in hospital after suffering 90% burns. He set himself alight last Friday in front of a university building in Lyon, hours after posting details of his own financial difficulties on social media.

The protesters brandished a banner, reading “solidarity and long live socialism”, and chanted “anti-capitalism” and “Hollande assassin”. Several videos posted on Facebook showed students, some with scarves covering their faces, throwing ripped books across the room and jostling with security guards.

On Wednesday Hollande issued a statement saying he understood that “legitimate” emotions were running high but regretted that “feelings turned into violence … leaving no place for dialogue”. He said the protest had robbed more than 1,000 students of the chance to discuss democracy with him at the event.

But Ndiaye said “nothing” could justify the acts of vandalism committed during protests triggered by the man’s self-immolation, which he blamed in a Facebook post on the policies pursued by France’s leaders.