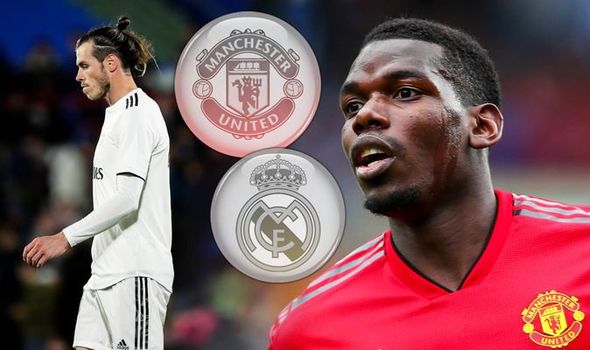 The administration of the Red Devils refused to discuss any offer for Pogba last summer.
According to the newspaper “The Sun”, the Real Madrid officials are convinced that if Bale did not join Manchester United in January, he will wear the shirt of the Red Devils during the summer.

The newspaper pointed out that Real Madrid’s realization of this fact, is the secret that the Royal Administration halted the deal to move Bale to the Chinese league for a season on loan at the last minute, after the player would have received a weekly salary of 1 million pounds sterling.

Sources revealed to the British newspaper, that Real Madrid realized that Manchester United is keen to resolve the deal of Bale, to save his season after the decline of results.

Gareth Bale did not play for Real Madrid for a month because of injury, before joining Wales and declaring that he feels comfortable playing there from being at the club.

Welsh fans angered Meringue after they raised flags that the order of Bale’s interests were: “Wales, golf and then Real Madrid.”

Sources close to Bale stress that he is ready to end his career at La Liga, and Real Madrid is ready to make the sale, but they want to use it first as a pressure tool to transfer Pogba to the “ Santiago Bernabeu ” in the upcoming winter transfers, and if not, the deal may be delayed for the summer.