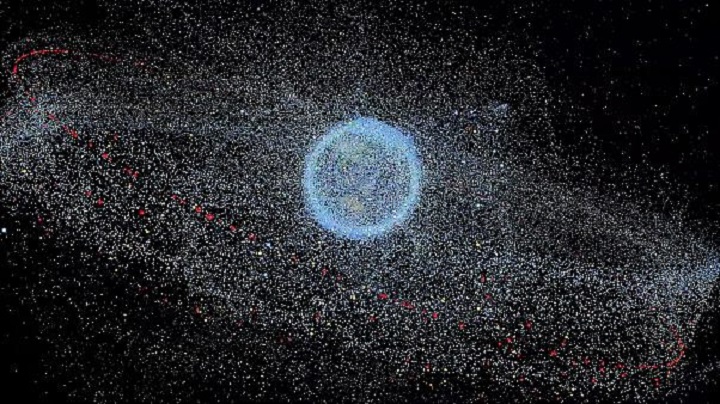 Levels of space junk are close to a tipping point, the European Space Agency (ESA)’s top safety official has warned.

Earth’s orbit is polluted by more than 34,000 man-made objects and there is no international regulation to force operators to retrieve their debris or abandoned devices.

Destroying objects in orbit is not an option as it would simply generate smaller debris.

The scale of the problem was illustrated in September when an ESA satellite had to dodge a small SpaceX Internet-providing craft.

Although such near-collisions have happened before, the urgency of the issue is underlined when considering the scale of the Starlink constellation imagined by Elon Musk, comprising some 12,000 satellites.

The ESA has recently commissioned the first space debris removal mission to Swiss startup, ClearSpace. The mission ClearSpace-1 is planned to operate in 2025 and will “hug” the unwanted VESPA satellite using four robotic arms and put it back in the atmosphere where it will disintegrate.

“Imagine how dangerous sailing the high seas would be if all the ships ever lost in history were still drifting on top of the water,” said Jan Wörner, ESA director-general in a briefing about the mission. “That is the current situation in orbit, and it cannot be allowed to continue.”

As for climate change, if nothing is done “we are heading for disaster” says Holger Krag, from the European Space Agency’s Space Safety department, in charge of the space debris. Euronews had the opportunity to discuss the issue during the recent European Space Week in Helsinki.

“Space sustainability” is one of the key issues for the space community and had a dedicated session during the European Space Week plenary. The arrival of new players able to put into orbit dozens of tiny satellites -the size of a shoebox- doesn’t help reducing space waste.
Space rule number one: there are no rules
People unfamiliar with space regulations might imagine that there’s a sort of air traffic control up there. In fact, there is none. “ESA is not a regulator,” says Krag. Nor is NASA.

“The space regulation from a legal point of view is that you have freedom. Every country has freedom to access space, almost unlimited freedom, and the actors in a country have the same freedom,” he said.

“In other words, freedom only stops when you start influencing the freedom of another. So you cannot put up just a law or a rule. That’s why I believe having an international regime like the one of air traffic won’t happen anytime soon,” says Krag.