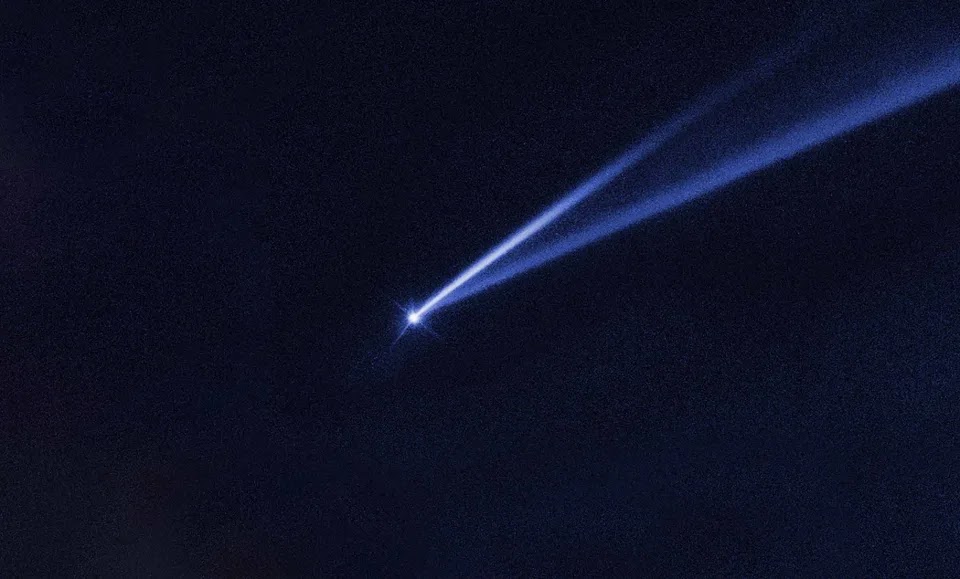 When astronomers see something in the universe that at first glance seems like one-of-a-kind, it’s bound to stir up a lot of excitement and attention. Enter comet 2I/Borisov. This mysterious visitor from the depths of space is the first identified comet to arrive here from another star. We don’t know from where or when the comet started heading toward our Sun, but it won’t hang around for long. The Sun’s gravity is slightly deflecting its trajectory, but can’t capture it because of the shape of its orbit and high velocity of about 100,000 miles per hour.

Telescopes around the world have been watching the fleeting visitor. NASA’s Hubble Space Telescope has provided the sharpest views as the comet skirts by our Sun. Since October the space telescope has been following the comet like a sports photographer following horses speeding around a racetrack. Hubble revealed that the heart of the comet, a loose agglomeration of ices and dust particles, is likely no more than about 3,200 feet across, about the length of nine football fields. Though comet Borisov is the first of its kind, no doubt there are many other comet vagabonds out there, plying the space between stars. Astronomers will eagerly be on the lookout for the next mysterious visitor from far beyond.

“Hubble gives us the best upper limit of the size of comet Borisov’s nucleus, which is the really important part of the comet,” said David Jewitt, a UCLA professor of planetary science and astronomy, whose team has captured the best and sharpest look at this first confirmed interstellar comet. “Surprisingly, our Hubble images show that its nucleus is more than 15 times smaller than earlier investigations suggested it might be. Our Hubble images show that the radius is smaller than half a kilometer. Knowing the size is potentially useful for beginning to estimate how common such objects may be in the solar system and our galaxy. Borisov is the first known interstellar comet, and we would like to learn how many others there are.”

Crimean amateur astronomer Gennady Borisov discovered the comet on Aug. 30, 2019, and reported the position measurements to the International Astronomical Union’s Minor Planet Center in Cambridge, Massachusetts. The Center for Near-Earth Object Studies at NASA’s Jet Propulsion Laboratory in Pasadena, California, working with the Minor Planet Center, computed an orbit for the comet, which shows that it came from elsewhere in our Milky Way galaxy, point of origin unknown.

Nevertheless, observations by numerous telescopes show that the comet’s chemical composition is similar to the comets found inside our solar system, providing evidence that comets also form around other stars. By the middle of 2020 the comet will have already zoomed past Jupiter’s distance of 500 million miles on its way back into the frozen abyss of interstellar space.

The Hubble Space Telescope is a project of international cooperation between ESA (the European Space Agency) and NASA. NASA’s Goddard Space Flight Center in Greenbelt, Maryland, manages the telescope. The Space Telescope Science Institute (STScI) in Baltimore conducts Hubble science operations. STScI is operated for NASA by the Association of Universities for Research in Astronomy in Washington, D.C. The Minor Planet Center and the Center for Near-Earth Orbit Studies are projects of NASA’s Near-Earth Object Observations Program of the Planetary Defense Coordination Office at NASA Headquarters.