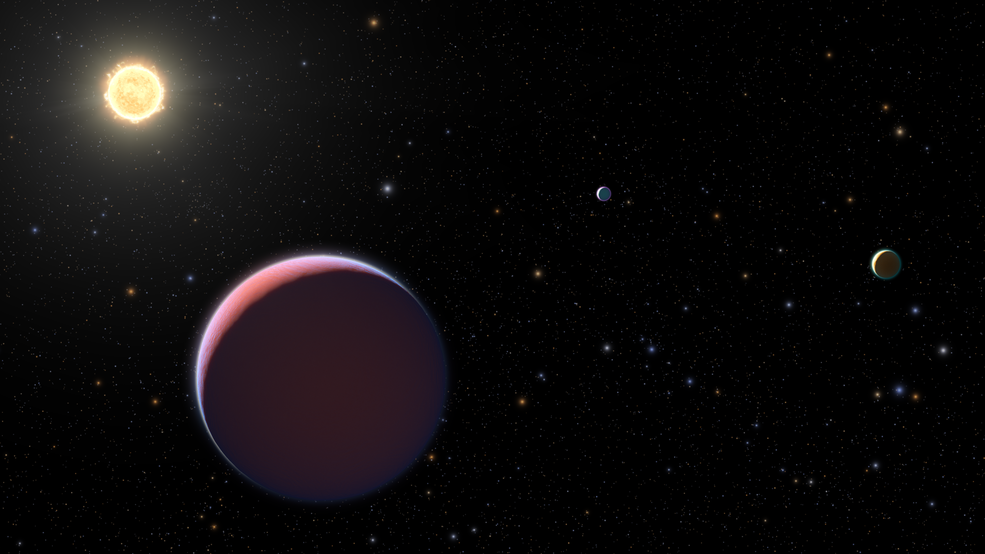 “Super-Puffs” may sound like a new breakfast cereal. But it’s actually the nickname for a unique and rare class of young exoplanets that have the density of cotton candy. Nothing like them exists in our solar system.

the Sun-like star Kepler 51 and three giant planets that NASA’s Kepler space telescope discovered in 2012–2014. These planets are all roughly the size of Jupiter but a tiny fraction of its mass. This means the planets have an extraordinarily low density, more like that of Styrofoam rather than rock or water, based on new Hubble Space Telescope observations. The planets may have formed much farther from their star and migrated inward. Now their puffed-up hydrogen/helium atmospheres are bleeding off into space. Eventually, much smaller planets might be left behind. The background starfield is correctly plotted as it would look if we gazed back toward our Sun from Kepler 51’s distance of approximately 2,600 light-years, along our galaxy’s Orion spiral arm.

New data from NASA’s Hubble Space Telescope have provided the first clues to the chemistry of two of these super-puffy planets, which are located in the Kepler 51 system. This exoplanet system, which actually boasts three super-puffs orbiting a young Sun-like star, was discovered by NASA’s Kepler space telescope in 2012. However, it wasn’t until 2014 when the low densities of these planets were determined, to the surprise of many.

The recent Hubble observations allowed a team of astronomers to refine the mass and size estimates for these worlds — independently confirming their “puffy” nature. Though no more than several times the mass of Earth, their hydrogen/helium atmospheres are so bloated they are nearly the size of Jupiter. In other words, these planets might look as big and bulky as Jupiter, but are roughly a hundred times lighter in terms of mass.

How and why their atmospheres balloon outwards remains unknown, but this feature makes super-puffs prime targets for atmospheric investigation. Using Hubble, the team went looking for evidence of components, notably water, in the atmospheres of the planets, called Kepler-51 b and 51 d. Hubble observed the planets when they passed in front of their star, aiming to observe the infrared color of their sunsets. Astronomers deduced the amount of light absorbed by the atmosphere in infrared light. This type of observation allows scientists to look for the telltale signs of the planets’ chemical constituents, such as water.

To the amazement of the Hubble team, they found the spectra of both planets not to have any telltale chemical signatures. They attribute this result to clouds of particles high in their atmospheres. “This was completely unexpected,” said Jessica Libby-Roberts of the University of Colorado, Boulder. “We had planned on observing large water absorption features, but they just weren’t there. We were clouded out!” However, unlike Earth’s water-clouds, the clouds on these planets may be composed of salt crystals or photochemical hazes, like those found on Saturn’s largest moon, Titan. 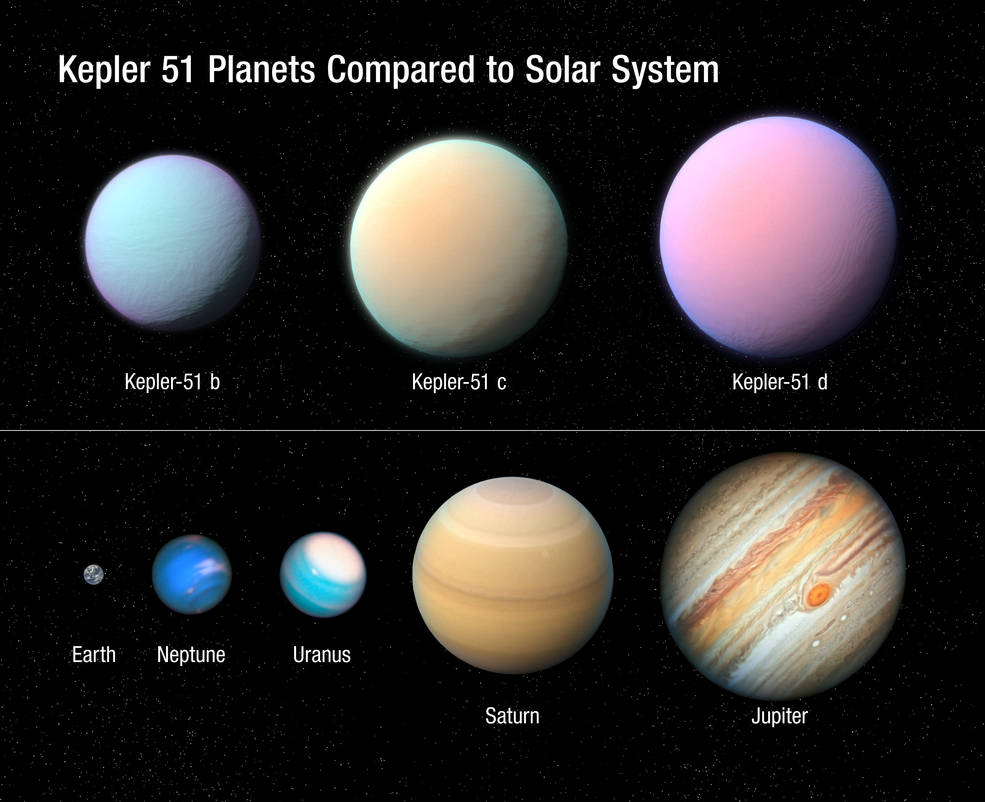 These clouds provide the team with insight into how Kepler-51 b and 51 d stack up against other low-mass, gas-rich planets outside of our solar system. When comparing the flat spectra of the super-puffs against the spectra of other planets, the team was able to support the hypothesis that cloud/haze formation is linked to the temperature of a planet — the cooler a planet is, the cloudier it becomes.

The team also explored the possibility that these planets weren’t actually super-puffs at all. The gravitational pull among the planets creates slight changes to their orbital periods, and from these timing effects planetary masses can be derived. By combining the variations in the timing of when a planet passes in front of its star (an event called a transit) with those transits observed by the Kepler space telescope, the team better constrained the planetary masses and dynamics of the system. Their results agreed with previous measured ones for Kepler-51 b. However, they found that Kepler-51 d was slightly less massive (or the planet was even more puffy) than previously thought.

In the end, the team concluded that the low densities of these planets are in part a consequence of the young age of the system, a mere 500 million years old, compared to our 4.6-billion-year-old Sun. Models suggest these planets formed outside of the star’s “snow line,” the region of possible orbits where icy materials can survive. The planets then migrated inward, like a string of railroad cars.

Now, with the planets much closer to the star, their low-density atmospheres should evaporate into space over the next few billion years. Using planetary evolution models, the team was able to show that Kepler-51 b, the planet closest to the star, will one day (in a billion years) look like a smaller and hotter version of Neptune, a type of planet that is fairly common throughout the Milky Way. However, it appears that Kepler-51 d, which is farther from the star, will continue to be a low-density oddball planet, though it will both shrink and lose some small amount of atmosphere. “This system offers a unique laboratory for testing theories of early planet evolution,” said Zach Berta-Thompson of the University of Colorado, Boulder.

The good news is that all is not lost for determining the atmospheric composition of these two planets. NASA’s upcoming James Webb Space Telescope, with its sensitivity to longer infrared wavelengths of light, may be able to peer through the cloud layers. Future observations with this telescope could provide insight as to what these cotton candy planets are actually made of. Until then, these planets remain a sweet mystery.

The Hubble Space Telescope is a project of international cooperation between NASA and ESA (European Space Agency). NASA’s Goddard Space Flight Center in Greenbelt, Maryland, manages the telescope. The Space Telescope Science Institute (STScI) in Baltimore conducts Hubble science operations. STScI is operated for NASA by the Association of Universities for Research in Astronomy in Washington, D.C.