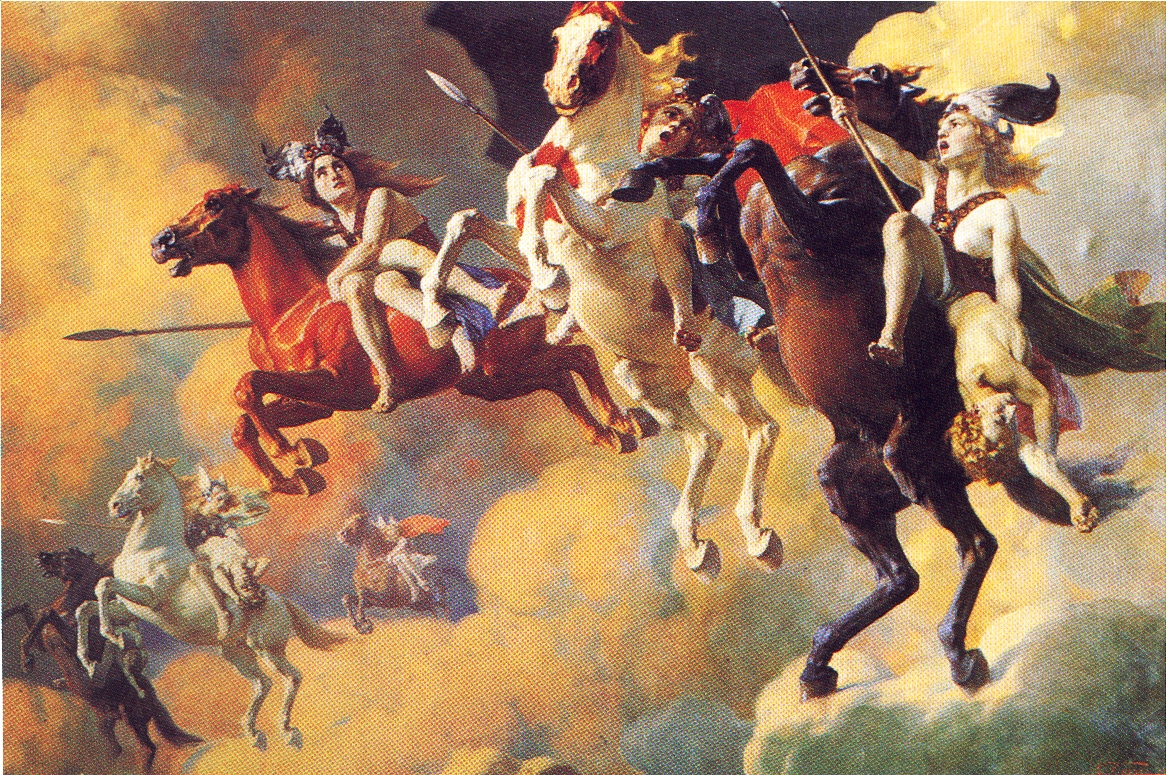 Valkyrie, also spelled Walkyrie, Old Norse Valkyrja (“Chooser of the Slain”), in Norse mythology, any of a group of maidens who served the god Odin and were sent by him to the battlefields to choose the slain who were worthy of a place in Valhalla. These foreboders of war rode to the battlefield on horses, wearing helmets and shields; in some accounts, they flew through the air and sea. Some Valkyries had the power to cause the death of the warriors they did not favour; others, especially heroine Valkyries, guarded the lives and ships of those dear to them. Old Norse literature made references to purely supernatural Valkyries and also to human Valkyries with certain supernatural powers. Both types of beings were associated with fairness, brightness, and gold, as well as bloodshed.

Most pop culture depictions of the Valkyrie will feature them in helmets, heavily armed, and ready for battle. But battle’s not the main function that the Valkyrie served in the original mythology at all. The perception is the result of a cultural blend of their legend with that of the Amazons from Greek mythology.

The true, primary purpose that the Norse god Odin had the Valkyrie serve was to arrive after the end of a battle and escort distinguished fallen warriors to the hallowed Valhalla, where they would rejoice with Odin (their name literally translates to “Choosers of the Slain”). They left the rest of the soldiers to the afterlife known as the Folkvangr (“Soldier Field”). Considering that Folkvangr was an afterlife ruled by the goddess of love and beauty Freya, it was probably a decent way to spend eternity, too. It’s understandable that being in proximity to battlefields convinced generations they must be female warriors. Honestly, though, getting a duty that involved staying out of the fray of battle seems like the best jobs they could have been assigned. Especially considering the status of medical equipment at the time.

Fantasy stories and movies like Thor: Ragnarok will present us with images of formidable ranks of Valkyries. Going by the number that were present at even the largest, most epic of battles in the sagas, there actually didn’t seem to be that many of them. Sources such as Norse Mythology A to Z state that there were either never more than 13 of them at a time. Sometimes there were nine of them. But the earliest surviving writing about them says that there were only six Valkyrie at the beginning.

Now granted, ancient Scandinavian armies were not huge. The roughly 4,000 the Vikings got together for the Battle of Maldon in 991 was very high by the standards of the time. Still, we would want many more than six potential eye witnesses/judges on hand to decide if we go to eternal reward, especially if there are numerous battles happening on Earth at the time. That doesn’t even seem like it would even be enough for a good serving staff for Valhalla, but they must have made do.