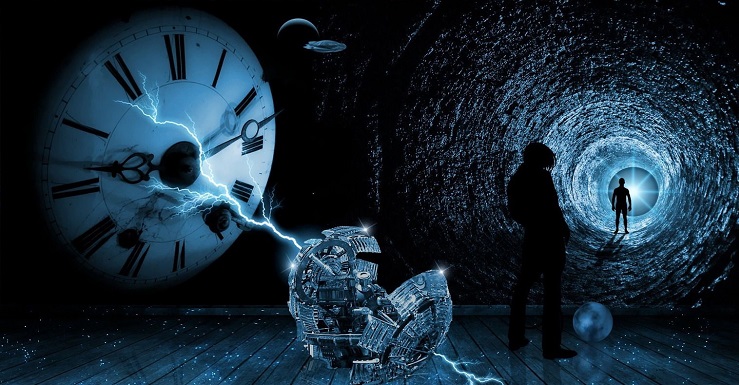 To better understand the idea of time travelling possibility ,we first need to know What is time? While most people think of time as a constant, physicist Albert Einstein showed that time is an illusion; it is relative — it can vary for different observers depending on your speed through space. To Einstein, time is the “fourth dimension.” Space is described as a three-dimensional arena, which provides a traveler with coordinates — such as length, width and height —showing location. Time provides another coordinate — direction — although conventionally, it only moves forward.

Time travel is the concept of movement between certain points in time, analogous to movement between different points in space by an object or a person, typically with the use of a hypothetical device known as a time machine. Time travel is a widely recognized concept in philosophy and fiction. The idea of a time machine was popularized by H. G. Wells’ 1895 novel The Time Machine.

History of the time travel concept

Some ancient myths depict a character skipping forward in time.

In Hindu mythology, the Mahabharata mentions the story of King Raivata Kakudmi, who travels to heaven to meet the creator Brahma and is surprised to learn when he returns to Earth that many ages have passed.

The Buddhist Pāli Canon mentions the relativity of time. The Payasi Sutta tells of one of the Buddha’s chief disciples, Kumara Kassapa, who explains to the skeptic Payasi that time in the Heavens passes differently than on Earth.

The Japanese tale of “Urashima Tarō”, first described in the Manyoshu tells of a young fisherman named Urashima-no-ko (浦嶋子) who visits an undersea palace. After three days, he returns home to his village and finds himself 300 years in the future, where he has been forgotten, his house is in ruins, and his family has died.

In Jewish tradition, the 1st-century BC scholar Honi ha-M’agel is said to have fallen asleep and slept for seventy years. When waking up he returned home but found none of the people he knew, and no one believed his claims of who he was.

One of the first stories to feature time travel by means of a machine is “The Clock that Went Backward” by Edward Page Mitchell, which appeared in the New York Sun in 1881. However, the mechanism borders on fantasy. An unusual clock, when wound, runs backwards and transports people nearby back in time. The author does not explain the origin or properties of the clock.

Enrique Gaspar y Rimbau’s El Anacronópete (1887) may have been the first story to feature a vessel engineered to travel through time.[ Andrew Sawyer has commented that the story “does seem to be the first literary description of a time machine noted so far”, adding that “Edward Page Mitchell’s story ‘The Clock That Went Backward’ (1881) is usually described as the first time-machine story, but I’m not sure that a clock quite counts.” H. G. Wells’s The Time Machine (1895) popularized the concept of time travel by mechanical means.

The great 20th century scientist Albert Einstein developed a theory called Special Relativity. The ideas of Special Relativity are very hard to imagine because they aren’t about what we experience in everyday life, but scientists have confirmed them. This theory says that space and time are really aspects of the same thing—space-time. There’s a speed limit of 300,000 kilometers per second (or 186,000 miles per second) for anything that travels through space-time, and light always travels the speed limit through empty space.

Could Quantum Gravity Allow Us To Time Travel?

According to general relativity – this might actually work. However, when it comes to our understanding of the Universe, general relativity may not be the final word. While general relativity does a great job at predicting how macroscopic objects like stars and planets move and interact, it is not a fundamental explanation of the Universe. It doesn’t take into account the very small, weird world of quantum mechanics. According to general relativity, large objects, such as planets, stars or galaxies, interact in a continuous manner. Gravity itself is a continuous force. In quantum mechanics, however, space, matter, energy, interactions… everything… are quantized. That means that there is a grainy-ness in space – that if you zoom up far enough – you should see the “pixels” of space.

When a signal is sent from one location and received at another location, then as long as the signal is moving at the speed of light or slower, the mathematics of simultaneity in the theory of relativity show that all reference frames agree that the transmission-event happened before the reception-event. When the signal travels faster than light, it is received before it is sent, in all reference frames. The signal could be said to have moved backward in time. This hypothetical scenario is sometimes referred to as a tachyonic antitelephone.

Absence of time travelers from the future

Carl Sagan once suggested the possibility that time travelers could be here but are disguising their existence or are not recognized as time travelers. Some versions of general relativity suggest that time travel might only be possible in a region of spacetime that is warped a certain way, and hence time travelers would not be able to travel back to earlier regions in spacetime, before this region existed. Stephen Hawking stated that this would explain why the world has not already been overrun by “tourists from the future.”

Time travel themes in science fiction and the media can generally be grouped into three categories: immutable timeline; mutable timeline; and alternate histories, as in the interacting-many-worlds interpretation. Frequently in fiction, timeline is used to refer to all physical events in history, so that in time travel stories where events can be changed, the time traveler is described as creating a new or altered timeline. This usage is distinct from the use of the term timeline to refer to a type of chart that illustrates a particular series of events, and the concept is also distinct from a world line, a term from Einstein’s theory of relativity which refers to the entire history of a single object.