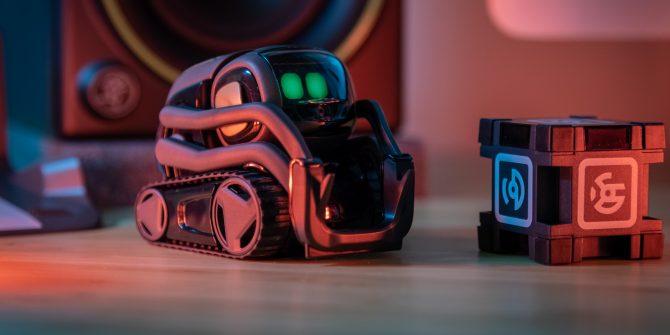 Say “Hey Vector.” Aware and reactive, Vector hangs out and helps out. Now with Alexa built-in. Robot helpfulness supercharged.
Vector is an intelligent home assistant robot with a personality. Not only can he see, hear, and talk to you, but he can think for himself. Throw in some Alexa-like voice assistance, and you may be looking at the greatest robot since Lost In Space. Here’s what we think of him.

Measuring 4 x 2.5 x 2.75 inches, and weighing 6 ounces, Vector can charge around like a mad thing for an hour. Vector will return to his included dock to charge when his battery runs low, but you’ll need to supply a 5V/1A USB charger, as this is not included.

You can also ask him a question, or give him a task. Want to know how many kilometers in a mile? What about a maths question, or the result of a sports game? Vector can handle most questions, but he’s not there yet. Ask him to dance and he’s off having a blast.

Vector will continue to get awesome new skills in the future. The next biggest update is Alexa integration. You’ll be able to ask your robot pal to turn off the lights, check your notifications, or forward you pictures from the doorbell.

This is where Vector has so much potential. Once more and more integrations come out, he’ll turn from a fun little toy to a wicked assistant on wheels. Nothing will hold him down as he races around the house, arranging your laundry, checking emails, and just generally hanging out.