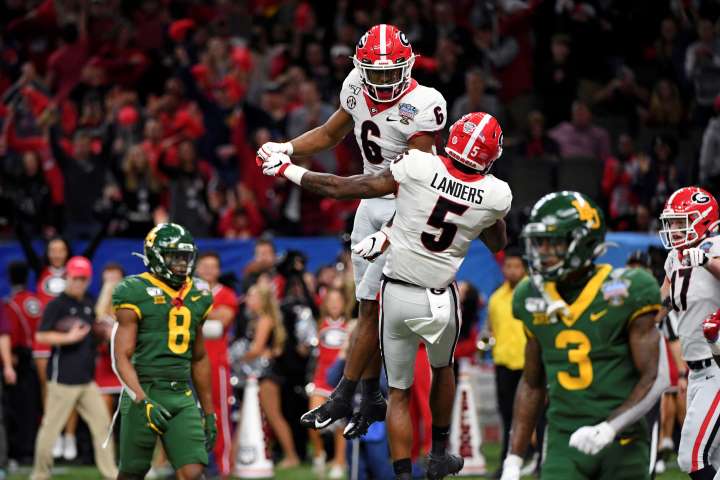 NEW ORLEANS (AP) — George Pickens caught 12 passes for 175 yards and a touchdown, and No. 5 Georgia defeated eighth-ranked Baylor 26-14 in the Sugar Bowl on Wednesday night.

Baylor quarterback Charlie Brewer, coming back from a concussion in the Big 12 title game on Dec. 7, was sidelined again in the fourth quarter when the back of his head appeared to hit hard on the turf as he was taken down by two Georgia defenders along the sideline.

While Georgia’s Travon Walker was penalized for a late hit, giving the Bears a first down, the drive stalled on a sack of backup QB Jacob Zeno on fourth down with about five minutes to go and Baylor trailing by 12.

Jake Fromm completed 20 of 30 passes for 250 yards and two touchdowns without an interception for Georgia (12-2), which was back in the Sugar Bowl for a second straight season, having lost to Texas last year.

Georgia was without about a dozen regulars, including three starting offensive linemen. Some players were hurt while others sat out to preserve their health for the NFL draft.

Meanwhile, top Georgia running back D’Andre Swift saw only limited action because of an ailing shoulder.
Zamir White, known for persevering through two major knee operations in recent years, carried 18 times for 92 yards and a touchdown.

Georgia defensive back Richard LeCounte intercepted two passes, the second sealing the victory in the final minutes.
Brewer completed 21 of 41 passes for 211 yards and one touchdown to Denzel Mims. Brewer was intercepted once.

After Georgia led 19-0 at halftime, Baylor (11-3) showed signs of mounting a comeback on the opening series of the second half with a scoring drive dominated by Mims. He had catches of 40 and 8 yards before his 12-yard touchdown grab trimmed the Bulldogs’ lead to 19-7. Mims also surpassed 1,000 yards receiving for the season on the drive.

The Bears quickly forced a Georgia punt and moved back across midfield when momentum suddenly swung back to the Bulldogs. Linebacker Azeez Ojulari sacked and stripped Brewer on fourth-and-4 and Walker recovered on the Baylor 47.

The Bulldogs capitalized with a touchdown drive extended by fake field goal in which holder Jake Camarda ran off tackle for 6 yards on fourth-and-2. White finished the series off with a tackle-breaking 13-yard run to the pylon.

Brewer’s short, second-effort TD run made it 26-14.
Pickens’ 46-yard catch deep down the middle on a flea flicker set up the first points of the game on Rodrigo Blankenship’s 24-yard field goal.

The Bulldogs widened the lead on Fromm’s 27-yard fade pass to the Pickens in the left side of the end zone.
Georgia made it 19-0 when Fromm, with time to survey the field behind that makeshift offensive line, threw hard over the middle for a 16-yard score to Matt Landers, the receiver’s first career TD.

Baylor threatened on just one drive in the first half, its second possession of the game. It fizzled when LeCounte made his third interception of the season on a pass tipped straight up in the air by Bears running back Trestan Ebner at the Georgia 18.