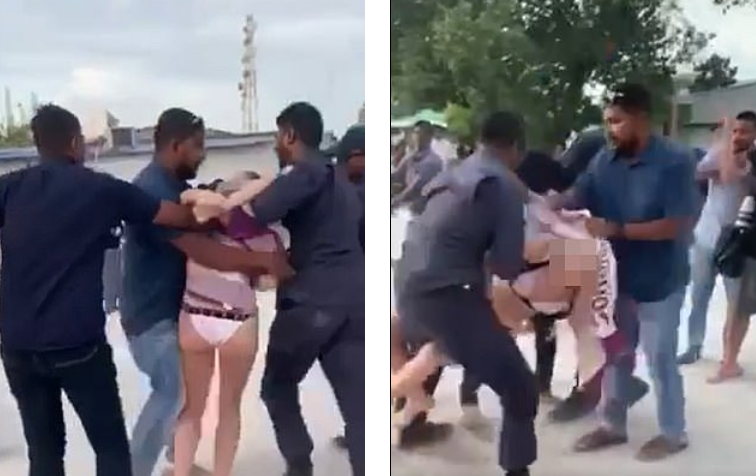 British Woman arrested for wearing a bikini in the Maldives

A British woman who was filmed being hauled off the streets by cops for wearing a bikini in the Maldives has accused police of groping her and assaulting her in custody.

Cecilia Jastrzembska, 26, said she was left fearing for her life after the officers slapped her, kicked her in the stomach, and strip searched her.

She said: ‘I was already injured and hyperventilating when they started to grope me. I was terrified. I thought my life was at risk.’

‘I thought I was being abducted,’ she told the Mirror.
She added that the men waved their fists in her face and she was ‘humiliated’ and ‘degraded’ by the incident.

Wearing bikinis is permitted in holiday resorts in the popular tourist location, although it is ‘strictly prohibited’ away from the resorts. It is not clear exactly where this video was filmed.

Jastrzembska was arrested last week for wearing a bikini in the Maldives. She had previously appeared on the TV shows First Dates and Ninja Warrior UK.

In the 30-second clip, she screamed ‘you’re sexually assaulting me’ as she was manhandled and arrested on the island of Maafushi.

The chief of police in the Maldives has now apologised for the incident after footage emerged of the arrest showing three men grappling with Cecilia and trying to put her in handcuffs as she attempted to fight them off earlier this week.

Another man covered part of her body with a towel as she was led away in front of a crowd of people.

Police commissioner Mohamed Hameed said an ‘incident in which our officers restrained a female tourist seems to be badly handled’.