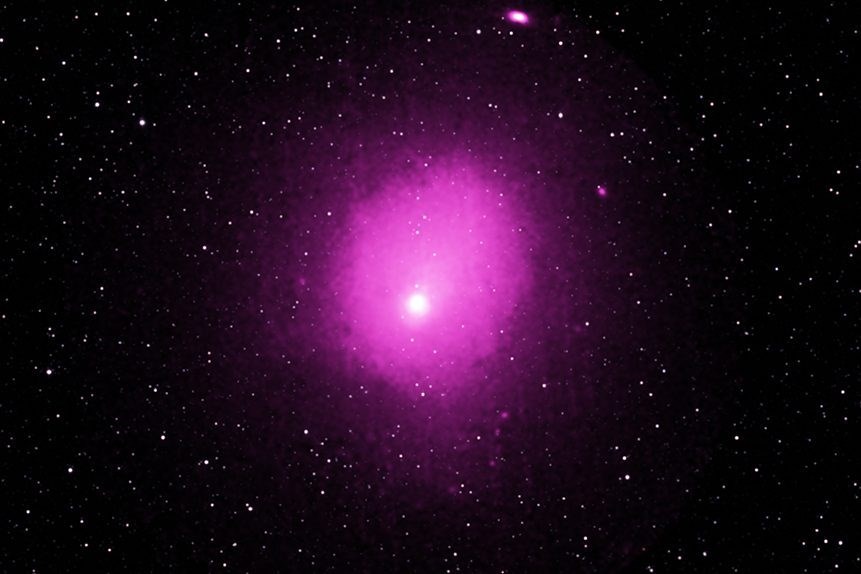 This record-breaking, gargantuan eruption came from a black hole in a distant galaxy cluster hundreds of millions of light years away.
Astronomers made this discovery using X-ray data from NASA’s Chandra X-ray Observatory and ESA’s XMM-Newton, and radio data from the Murchison Widefield Array (MWA) in Australia and the Giant Metrewave Radio Telescope (GMRT) in India. 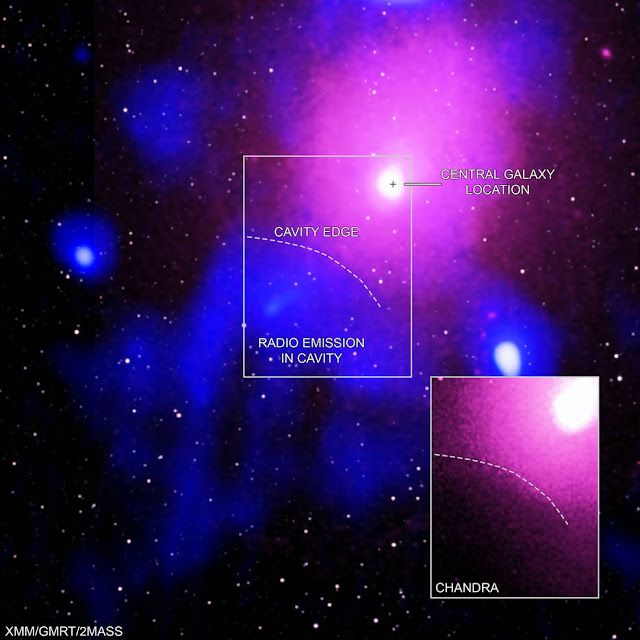 The unrivaled outburst was detected in the Ophiuchus galaxy cluster, which is about 390 million light years from Earth. Galaxy clusters are the largest structures in the Universe held together by gravity, containing thousands of individual galaxies, dark matter, and hot gas.
In the center of the Ophiuchus cluster, there is a large galaxy that contains a supermassive black hole. Researchers think that the source of the gigantic eruption is this black hole.
Although black holes are famous for pulling material toward them, they often expel prodigious amounts of material and energy. This happens when matter falling toward the black hole is redirected into jets, or beams, that blast outward into space and slam into any surrounding material.
The latest study by Giacintucci and her colleagues show that an enormous explosion did, in fact, occur. First, they showed that the curved edge is also detected by XMM-Newton, thus confirming the Chandra observation. Their crucial advance was the use of new radio data from the MWA and data from the GMRT archives to show the curved edge is indeed part of the wall of a cavity, because it borders a region filled with radio emission. This emission is from electrons accelerated to nearly the speed of light. The acceleration likely originated from the supermassive black hole.
The amount of energy required to create the cavity in Ophiuchus is about five times greater than the previous record holder, MS 0735+74, and hundreds and thousands of times greater than typical clusters.
The black hole eruption must have finished because the researchers do not see any evidence for current jets in the radio data. This shutdown can be explained by the Chandra data, which show that the densest and coolest gas seen in X-rays is currently located at a different position from the central galaxy. If this gas shifted away from the galaxy it will have deprived the black hole of fuel for its growth, turning off the jets.
This gas displacement is likely caused by “sloshing” of the gas around the middle of the cluster, like wine sloshing around in a glass. Usually the merger of two galaxy clusters triggers such sloshing, but here it could have been set off by the eruption.
One puzzle is that only one giant region of radio emission is seen, as these systems usually contain two on opposite sides of the black hole. It is possible that the gas on the other side of the cluster from the cavity is less dense so the radio emission there faded more quickly.
“As is often the case in astrophysics we really need multiwavelength observations to truly understand the physical processes at work,” said Melanie Johnston-Hollitt, a co-author from International Centre for Radio Astronomy in Australia. “Having the combined information from X-ray and radio telescopes has revealed this extraordinary source, but more data will be needed to answer the many remaining questions this object poses.”
NASA’s Marshall Space Flight Center manages the Chandra program. The Smithsonian Astrophysical Observatory’s Chandra X-ray Center controls science and flight operations from Cambridge and Burlington, Massachusetts.