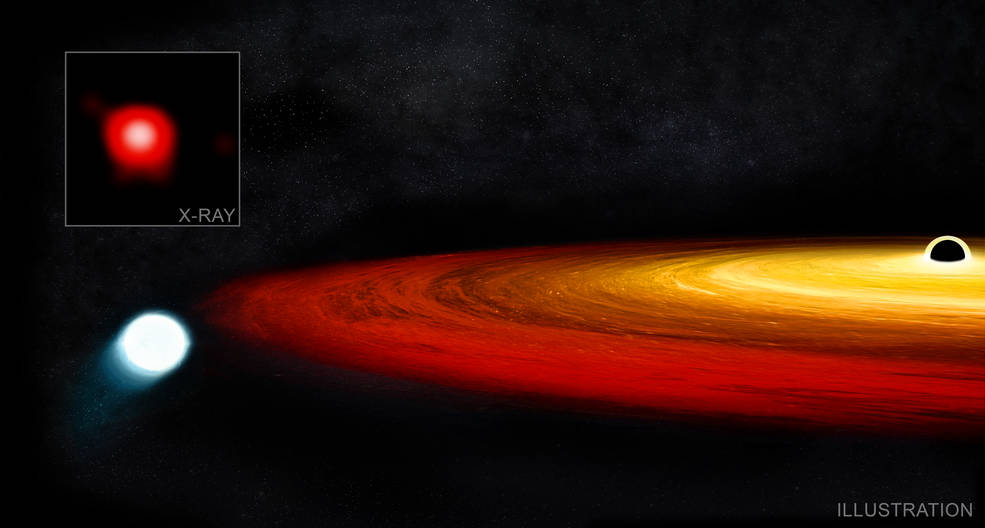 Data from NASA’s Chandra X-ray Observatory and ESA’s XMM-Newton uncovered the account that began with a red giant star wandering too close to a supermassive black hole in a galaxy about 250 million light years from Earth.

The black hole, located in a galaxy called GSN 069, has a mass about 400,000 times that of the Sun, putting it on the small end of the scale for supermassive black holes.
Once the red giant was captured by the black hole’s gravity, the outer layers of the star containing hydrogen were stripped off and careened toward the black hole, leaving the core of the star – known as a white dwarf – behind.
“In my interpretation of the X-ray data the white dwarf survived, but it did not escape,” said Andrew King of the University of Leicester in the UK, who performed this study. “It is now caught in an elliptical orbit around the black hole, making one trip around about once every nine hours.”
As the white dwarf makes its nearly thrice-daily orbit, the black hole pulls material off at its closest approach. The stellar detritus enters into a disk surrounding the black hole and releases a burst of X-rays that the telescopes can detect.
What would be the future of the star and its orbit?
The combined effect of gravitational waves and an increase in the star’s size as it loses mass should cause the orbit to become more circular and grow in size. In this case, the rate of mass loss steadily slows down, and the white dwarf slowly spirals away from the black hole.
“It will try hard to get away, but there is no escape. The black hole will eat it more and more slowly, but never stop,” said King. “In principle, this loss of mass would continue until and even after the white dwarf became a planet, with a mass similar to Jupiter, in about a trillion years. This would be a remarkably slow and convoluted way for the universe to make a planet!”