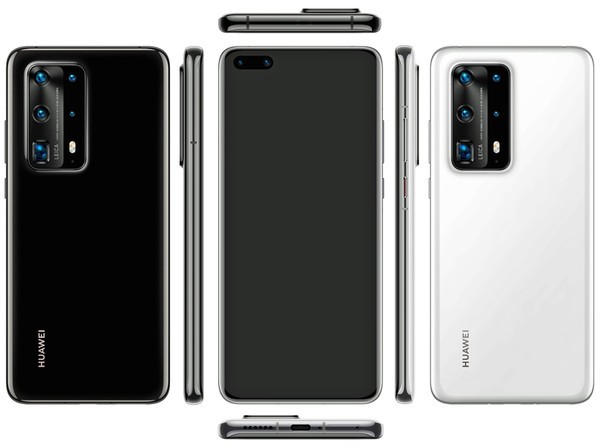 Earlier this week, an alleged press render of the Huawei P40 had been leaked online, giving us a look at the upcoming smartphone from every angle. A render of the P40 Pro had also surfaced yesterday, revealing all the color options that the phone will be available in. Now, reliable leaker Evan Blass has shared a new render of the flagship P40 Pro, giving us a good look at its design from all sides.
The latest render of the Huawei P40 Pro reaffirms the presence of a pill-shaped hole-punch cutout on the top left corner of the display, housing dual selfie cameras. While the previously leaked render of the P40 Pro had shown a quad camera array on the back of the phone, the latest render reveals a more impressive penta-lens camera setup. It also suggests the phone will come with a premium ceramic build. Even though Blass hasn’t confirmed it, some are suggesting Huawei may launch three P40 series phones this year. The variant seen in the render above could be a “premium” version of the P40 Pro.
Additionally, the render confirms the P40 Pro will have the power as well as volume control buttons on the right side. At the bottom of the phone will be a USB Type-C port, flanked by a speaker grill and the SIM card slot.
While the P40 Pro appears to be largely identical to the standard P40 in terms of design, there will be a few key differences. Unlike the P40 Pro, the P40 will come with a triple-camera array at the back. And while the Huawei P40 will have a flat display measuring around 6.2-inches, the P40 Pro will have a curved display measuring between 6.5 and 6.7-inches. Both the phones are slated to make their global debut at an event in Paris in March.