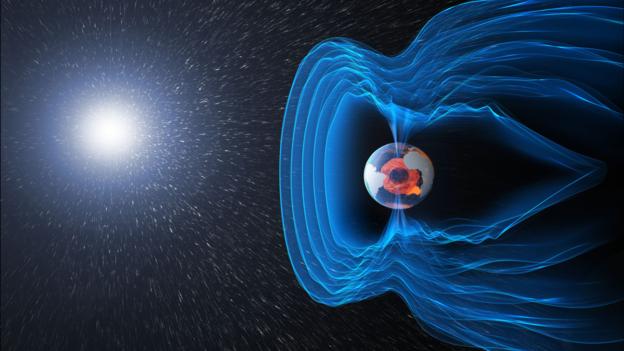 A new scientific study revealed that the region of magnetic anomalies in the South Atlantic, where the intensity of the magnetic field decreases due to mysterious reasons.
The Earth’s magnetic field is essential to life on our planet. It plays the role of a powerful shield that protects living things from cosmic radiation and charged solar particles.

The magnetic field is often depicted as a bipolar magnet tilted about 11 degrees from the axis of rotation.

But the magnetic anomalies observed by scientists in a vast area between Africa and South America seeing a decrease in magnetic density shows that the Earth’s magnetic field is actually more complex than scientists previously thought.
Although scientists know that the Earth’s magnetic field is created by the movement of molten iron that circulates in the outer nucleus like the dynamo of a bicycle, generating electrical currents that in turn create the magnetic field, the magnetic depressions and how they happen represent a puzzle for them, and the time and place of their occurrence cannot be predicted.
But some scientists associate the regions with magnetic anomalies and another phenomenon is the inversion of the Earth’s magnetic field when the north magnetic pole of the earth becomes in its south and the south pole in its north.
Unlike the geographic North Pole, which is in a fixed location, scientists have observed since 1831 that the magnetic north location is changing with time, and that it is moving slowly from the Canadian Arctic regions towards Siberia.
This displacement has gained since the nineties of the last century, a speed of between 50 and 60 km per year, compared to less than 15 km in the past, which means the need to update the global magnetic model repeatedly, which is vital for navigation on smart phones for example.
Research has shown that the reflection of the Earth’s magnetic field occurs every few hundreds of thousands of years, but it is not entirely clear how these reflections can be linked to what is currently happening with anomalies in the South Atlantic Ocean, scientists say.
Some scientists have assumed that this could be the result of a huge reservoir of dense rocks beneath Africa called the Great African Low Speed ​​Zone.
At the moment, there is no cause for concern, the researchers say, as the European Space Agency indicates that the most significant impacts today are largely limited to technical faults that can occur to satellites and spacecraft.
But that does not mean that the importance of this magnetic anomaly should be underestimated. In the past two centuries, the Earth’s magnetic field has lost about 9% of its strength on average.