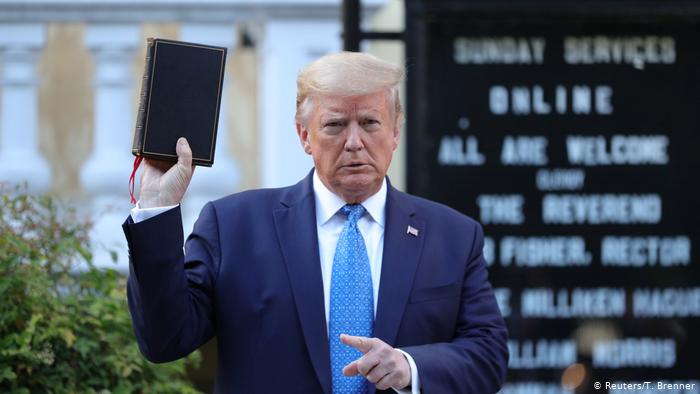 US President Donald Trump  vowed to end violent protests across the country threatening to deploy the army ‘US military troops’ to cities even if mayors and governors object, to stop what he described as the organizers of chaos, and announced the deployment of additional forces in Washington, while protests and clashes continued in several areas, and the Washington and New York authorities imposed curfews in them.
In a speech from the White House on Monday evening local time, Trump said he would take immediate steps to stop the violence, and that he was mobilizing the military and civilian resources available to do so.
He added that he would deploy the US military in the troubled regions if any state refused to implement the measures required to stop the violence, noting that he would continue to deploy thousands of heavily armed soldiers and police in Washington to stop the violence, looting and destruction of property, which he said were not peaceful protests but rather ” Domestic terrorism. “
He said that the disturbances in which five people have been killed so far are a wave of violence, chaos and destruction of property behind which groups want to create chaos.
He also said that he vowed to abide by justice and truth, and that Floyd’s death would not be in vain, but he stressed that peaceful protests should not be spoiled by violence.
External solidarity
In Canada, thousands of Montreal residents took to the streets, demanding law enforcement in the case of Floyd’s death.
In New Zealand, demonstrations were held in solidarity with the protests in the United States following the killing of Floyd.
The demonstrators held placards in solidarity with the rights of black citizens in the United States, and others denounced what they considered discrimination against them.
In Oakland (north of the country), protesters gathered in the city center before marching toward the US Consulate General.