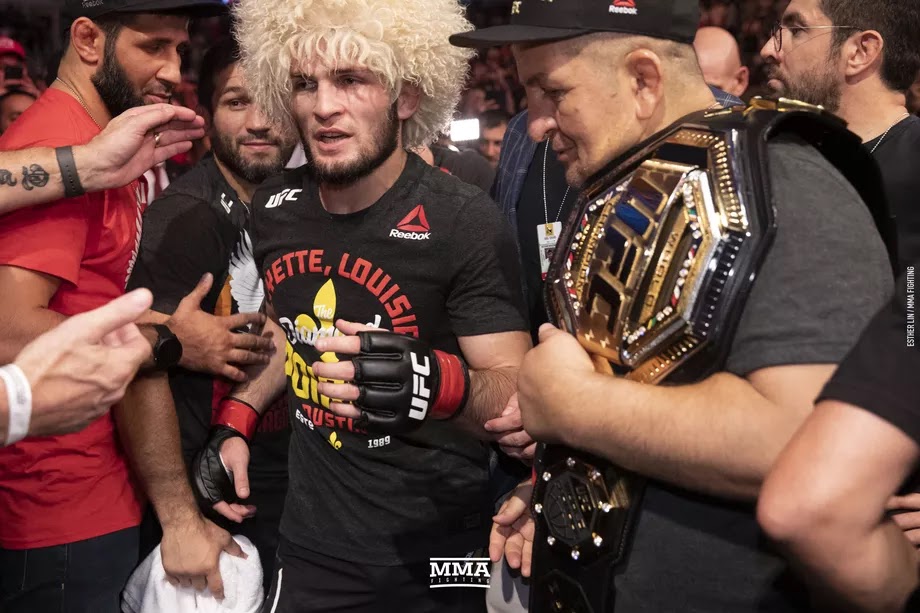 Khabib Nurmagomedov’s father remains in intensive care in a Moscow hospital, but he’s awake and responsive after he was removed from a medically induced coma.

“His condition is still serious, he’s still in intensive care,” Nurmagomedov said on Russian television via RT Sport. “The coronavirus itself is behind him, but the virus has had consequences for his kidneys and his heart.
“As for the virus, there’s no need to worry, only about the other consequences.”
Abdulmanap Nurmagomedov, 57, was admitted to a military hospital in Moscow after he suffered an apparent stroke due to complications caused after he was diagnosed with COVID-19. According to reports, he was placed in a coma after having heart bypass surgery, but he has regained consciousness as his condition began to improve.
Nurmagomedov has remained by his father’s side ever since he was admitted into the hospital.
The UFC champ added that while his father is still unable to speak, he has communicated with his son during frequent visits to the hospital.
“I visit him, [and] he recognizes me, but there’s no communication because he’s connected to [medical] devices,” Nurmagomedov explained. ”Every day they let me in, I spend half an hour [with him], I hold his hand.
“When I ask: ‘Father, do you recognize me?’ He gestures and lets me know.”
The undefeated Russian added that he has faith and confidence that his father is receiving the best medical care possible, but he understands that the road to recovery will still be difficult.
“These are some of the best doctors in the world,” Nurmagomedov said. “I have no concerns [about my father’s care], many thanks to them.
“In that respect, all’s well. It takes time, because the consequences are very difficult, and the rehabilitation period will be long and tough.”