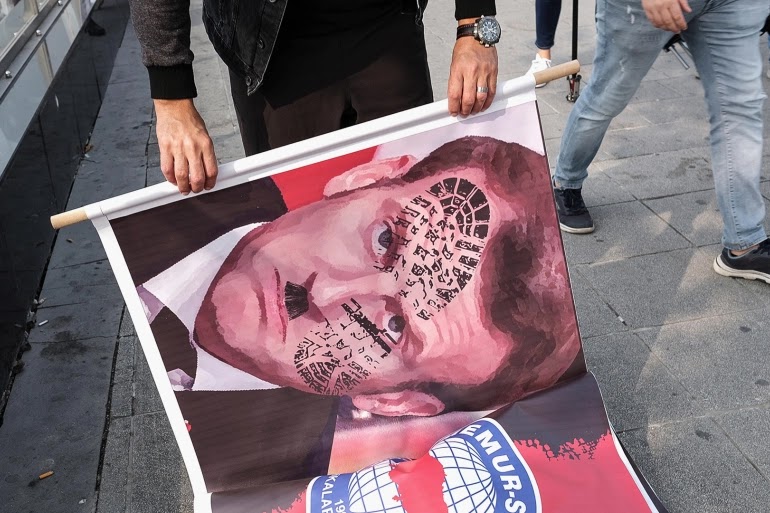 The scope of calls for a boycott of French goods has expanded in many Arab and Islamic countries, in response to the insistence of the French authorities to stick to publishing the cartoons offensive to the Prophet Muhammad, may God bless him and grant him peace.

Commenting on these calls, French President Emmanuel Macron said – in his Arabic tweet on Twitter – that nothing makes him ever back down, and he respects all differences in the spirit of peace, and never accepts what he called a hate speech.

The French Foreign Ministry issued a statement saying that the past few days have witnessed calls in many countries of the Middle East to boycott French products, especially food products, as well as calls for demonstrations against France over the publication of cartoons insulting to the Prophet Muhammad, may God bless him and grant him peace.

And the governments of the countries concerned called for “stopping” calls to boycott French goods and demonstrate, saying that they come from a “radical minority.”

The French Foreign Ministry said in its statement that “the calls for a boycott are absurd and must stop immediately, as should all attacks on our country that are behind a radical minority.”

In Egypt, Macron was mocked by social media users, a list of French brands circulated, and bloggers called for a boycott.

In Kuwait, the Federation of Consumer Cooperatives announced a boycott of French products.

The president of the federation, Fahd Al-Kashti, told Reuters that the union had asked all cooperative societies in Kuwait to boycott French products, “a victory for the Prophet Muhammad, may God bless him and grant him peace.”

“All French products have been removed from all associations,” he added, and the shelves of cooperative societies visited by Reuters on Saturday evening and Sunday morning were empty of French products, and signs reading “boycotting French products” or “Only the Messenger of God.” … we decided to remove all French products from the market and branches until further notice, in support of our Prophet Muhammad. “

In Qatar, a number of commercial companies and e-sales services decided to stop selling and marketing French products, and worked to remove them from their websites, in response to the Arab boycott campaign for French goods and products.

Kuwaiti Foreign Minister Ahmed Nasser Al-Muhammad Al-Sabah informed the French ambassador to his country, Anne Claire Le Jendre, of “the necessity of stopping the offenses against all divine religions and the prophets, peace be upon them, in some official speeches.”

For his part, Morocco condemned – yesterday, Sunday – the “persistence” in publishing cartoons insulting to Islam and the Messenger, and “which reflect the lack of maturity of their perpetrators.”

A foreign ministry statement pointed out that “Morocco strongly condemns the persistence in publishing cartoons insulting to Islam and to the Prophet Muhammad, may blessings and peace be upon him.”

The Kingdom expressed its “condemnation of these acts, which reflect the lack of maturity of the perpetrators.”

In Lebanon, the Secretary General of Dar Al Iftaa called on Amin Al-Kurdi to boycott French goods, commenting on the continued publication of the cartoons offensive to the Prophet.

“I call on all the free people in Lebanon and the world to continue the campaign to boycott French goods, until the aggressors against our Messenger Muhammad, may blessings and peace be upon him, return from their intimidation and aggression,” Kurdish said.

In Saudi Arabia, the Council of Senior Scholars (official) stressed in a statement that “insulting the shrines of the Prophets and Messengers, may blessings and peace be upon them, is not related to freedom of expression and thinking,” without directly addressing France or Macron.

In response to Macron’s statements, Pakistan‘s Prime Minister Imran Khan said – yesterday, Sunday – that French President Emmanuel Macron “attacked Islam” when he encouraged the display of cartoons that mock the Prophet Muhammad, may God bless him and grant him peace.

The cartoons were displayed on government buildings in France on Friday, causing an uproar in the Arab and Islamic world.