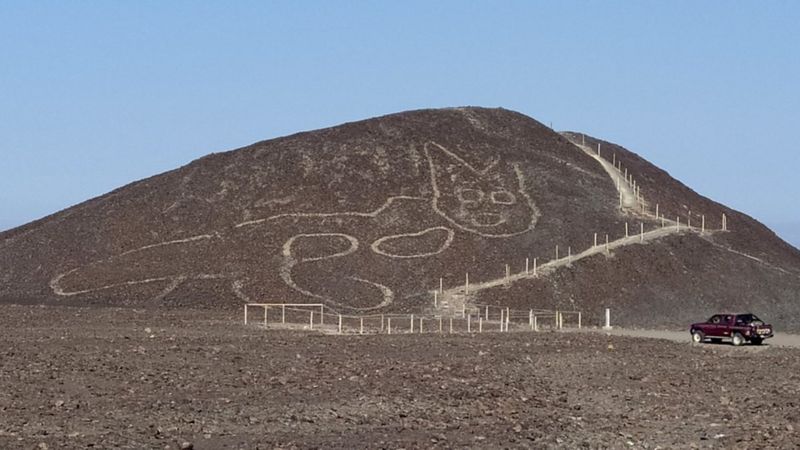 The Nazca Lines is a series of ancient rock inscriptions (geoglyphs) located in the Nazca Desert in southern Peru, considered a World Heritage Site by UNESCO in 1994, and extends on the arid plateau for more than 80 km between the towns of Nazca and Palba at a distance of 400 km south of Lima.

This lines represent animal figures, and are believed to date back to the Nazca civilization between AD 400 and 650.

Scientists believe that the cat, as with other Nazca animal figures, was created by creating depressions in the desert floor, while leaving the colored ground exposed.

No one noticed the cat until plans were recently made for a new route to an observation deck.

The platform would provide a distinct point for visitors to see many other geoglyphs.

the Peruvian Ministry of Culture said in a statement “The shape was barely visible and was about to disappear, as it is located on a steep slope exposed to the effects of natural erosion,”

She added that the geoglyph, which is about 37 meters long, had been cleaned and maintained over the past week.

The cat dates back to before the Nazca culture, which established most of the forms from 200 to 700 AD, Johnny Isla, Peru’s chief archaeologist on the Nazca Lines, told the Evie news agency.

He explained that the cat was actually from the late Paracas era, which spanned from 500 BC to 200 AD. “We know this by comparing icons. Paracas textiles, for example, show birds, cats and people who can be easily compared to these geoglyphs.”