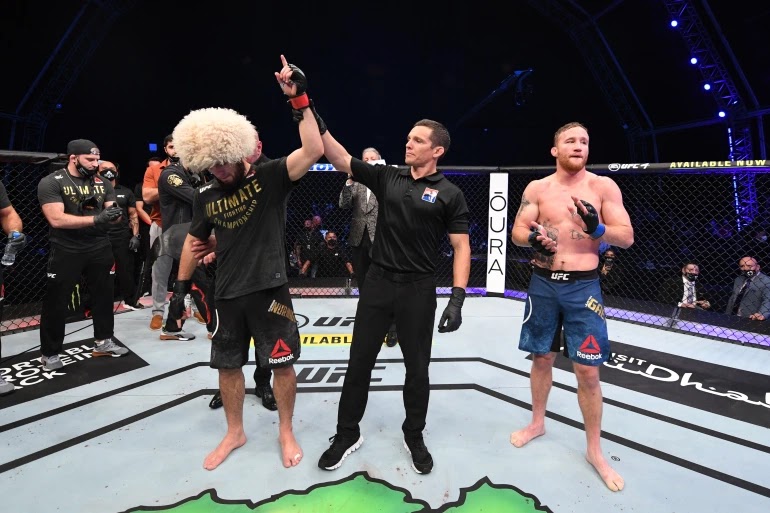 After the match ended, Khabib Nurmagomedov shocked the journalists accompanying the “UFC 254” tournament in Abu Dhabi by retiring live in front of the cameras.

Khabib Nurmagomedov eliminated his opponent, Gaethje, and lost consciousness after being strangled in the second round, to retain his title as lightweight champion.

The 32-year-old champion from Dagestan, who never lost, collapsed in the ring in tears after beating Gaethje. When he got up, he took off his gloves and said, “This is my last battle in (UFC).”

American Gaethje disturbed his opponent Khabib with kicks in the leg, but he gave up when he choked him in the second round, to cement Khabib his position as the most dominant fighter ever with a record of 29 wins without defeat.

Khabib Nurmagomedov insisted that he would not return to the fighting again without his father, Abdul Manaf, who died after complications due to his infection with the Coronavirus.

It is noteworthy that Abdul Manaf was transferred to a hospital in the Russian capital, Moscow, after he had severe symptoms due to corona infection, and it seems that Habib was greatly affected by the departure of his father.

And he promised his mother – to whom he spoke for 3 days before he decided to accept Ghaithi’s confrontation – that his next match would be his last.

“Today, I want to say this was my last fight,” Nurmagomedov said. “… It was my father’s dream. What else?”