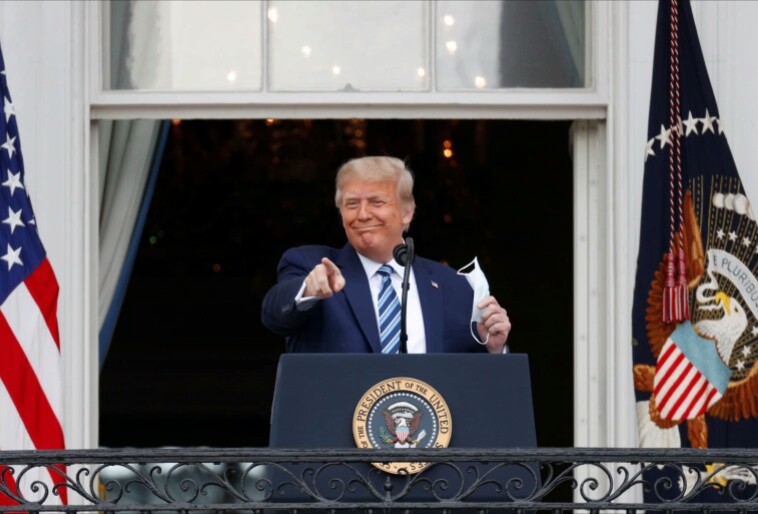 Today, Saturday, US President Donald Trump participated in his first public event since announcing his infection with the Coronavirus more than a week ago.

Trump delivered a speech from the balcony of the White House to hundreds of attendees who gathered in the garden below.

The White House called the meeting a “peaceful protest for law and order.” Trump called on his supporters to maintain their enthusiasm for voting in the presidential elections, and he also stressed that he feels “excellent” after recovering from Corona.

In this context, he thanked his supporters for their good wishes for him and the first lady Melania to be cured of the virus.

He stressed that American scientists will eradicate “the China virus from its roots once and for all,” referring to Corona.

Returning to politics, Trump said, “We will not allow America to turn into a socialist country .. We must get rid of the left movement in America .. If the radical left rules, they will launch a campaign against the application of the law.”

He also considered that his rival for the presidency, Joe Biden, “betrayed African Americans” and that “the policy of the Democrats has proven its failure in administration … Cities are burning and the Democrats say everything is fine.” On the presidential elections, Trump pointed out that “big problems are recorded in the ballot papers through the mail.”

He also recalled that he had announced a plan “to prosper in Latin and Afro-American society, adding:“ We achieved a significant reduction in the crime rate, unlike the Obama administration. ”And he continued,“ We ​​were in a great economic situation before the pandemic struck us .. Unemployment fell to its lowest levels before The pandemic. ”

In a related context, he affirmed that the Obama Care system will be replaced by a“ better and less expensive health system ”.

He again urged his supporters to vote massively, especially in Florida, adding: “Our electoral situation in Texas is more than excellent.”

He continued, addressing his supporters: “I love you .. Go vote and win an additional 4 years .. These presidential elections are the most important.”

Trump had tested positive for the virus on October 2 and spent three nights in a hospital before returning to the White House on Monday.

The president did not clarify whether he is still a carrier of the infection, and only clarified that he no longer suffers from symptoms of the virus that has killed more than 210,000 Americans.