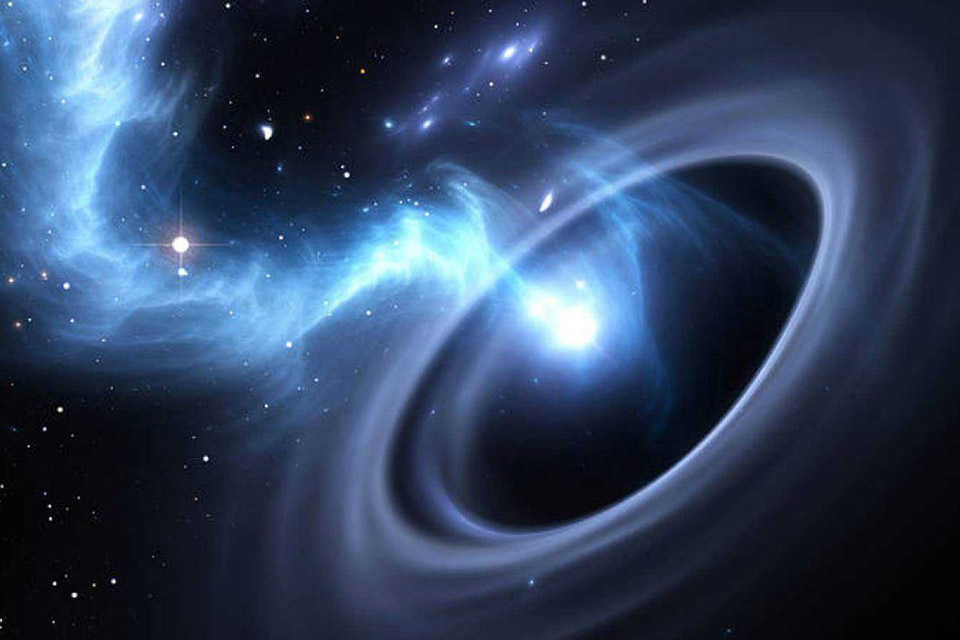 Astronomers have discovered 6 galaxies trapped around a supermassive black hole a billion times the mass of our sun, the first time that such a close cluster has been seen during the first billion years of the universe’s life. That is, shortly after the Big Bang.

This came in a paper published on October 1 in the journal “Astronomy & Astrophysics”.

This new discovery, made with the help of the very large telescope at the European Southern Observatory, helps On a better understanding of how supermassive black holes – one of which is at the center of our Milky Way galaxy – are growing enormously in size and rapidly.

“This research was mainly driven by the desire to understand some of the most astronomical objects,” says Marco Minoli, an astronomer at the National Institute for Astrophysics-INAF in Bologna, Italy, and lead author of the new research in the press release published on the observatory’s website. Challenging, which is the supermassive black holes in the early universe. “

New observations from the European Southern Observatory revealed many galaxies surrounding a supermassive black hole, all of which lie in a cosmic “spider web” of gas extending more than 300 times the size of the Milky Way.

“The threads of the cosmic web are like the threads of a spider’s web,” explains Minoli. “Galaxies stand and grow where their filaments intersect, and the streams of gas available to feed both galaxies and the central supermassive black hole can flow along the filaments.”

Roberto Gelli, an astronomer at the institute and co-author of the study, says that the light emitted from this large structure, which resembles a grid with its black hole of one billion solar masses, has been transmitted to us since the age of the universe is only 0.9 billion years.

Scientists have sought to explain how large quantities of “black hole fuel” were available to enable these bodies to grow to such enormous sizes in such a short time in the life of the universe.

The discovered new structure provides a possible explanation, as the “spider web” and the galaxies within it contain enough gas to provide the fuel that the central black hole needs to quickly become a supermassive giant.

How were the massive structures formed?

Scientists believe that gigantic auras of mysterious dark matter are the key, and that these large regions of invisible matter attracted massive amounts of gas in the early universe, thus forming invisible gas and dark matter together forming network-like structures where galaxies and black holes could develop.

Co-author of the study, Colin Norman of Johns Hopkins University in Baltimore, United States, says, “Our finding supports the idea that more distant and massive black holes form and grow within massive dark matter halos in large-scale structures, and that the absence of early discoveries. For such structures it was most likely due to monitoring restrictions. “

The galaxies discovered now are among the weakest galaxies that current telescopes can observe, and this discovery required observations over the course of several hours using the largest optical telescopes available, including the very large telescope in the European Southern Observatory.

“We believe that we have just seen the tip of the iceberg, and that the few galaxies that have been discovered so far around this supermassive black hole are only the brightest galaxies,” says Barbara Palmaverdi, a researcher at the National Institute of Astrophysics in Turin, Italy.