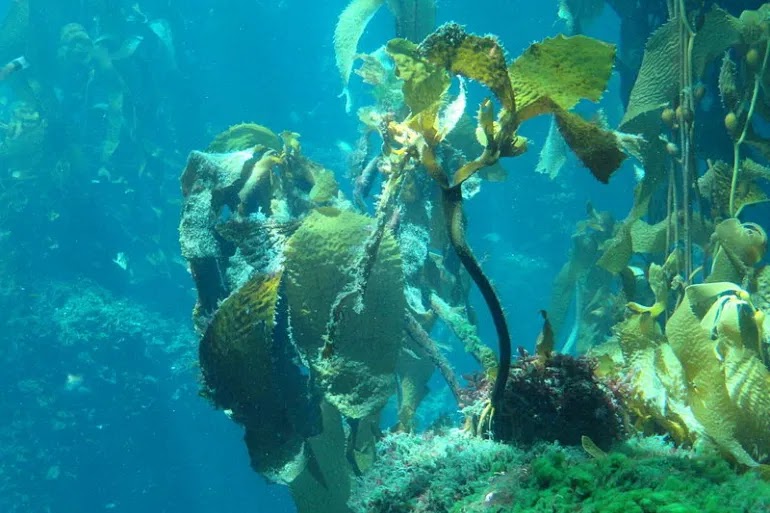 A recent study published on October 22 in the journal JGR Oceans showed that kelp seaweed from brown algae (kelp), which grows in the upper surface layers of California’s coastal waters, is able to reduce the acidity of the oceans .

This was the result of an academic collaboration between California State University, Northridge, and Stanford University, which released a statement of results on November 19.

The research team focused on studying the role of the giant kelp in Monterey Bay off the coast of California in mitigating ocean acidification.

The researchers found that the pH near the ocean surface was slightly higher and therefore less acidic than the lower layers of water, indicating that the kelp canopy lowered the acidity of the water in which it was actually found.

The researchers found that the pH near the ocean surface was slightly higher and therefore less acidic than the lower layers of water, indicating that the kelp canopy lowered the acidity of the water in which it was actually found.

By virtue of their location close to the surface, these impacts did not extend to the ocean floor, where sensitive coral reefs live in cold waters, and hedgehogs and oysters are affected dramatically by the acidification disaster caused by the seas absorbing a lot of carbon from the atmosphere.

Researchers have set up operations at Stanford University’s Hopkins Marine Station, a marine laboratory in Pacific Grove in California, where they gathered data – offshore – from a 100-meter kelp forest.

Then they evaluated the results of the pH sensors that were distributed throughout the area in conjunction with the water sampling to understand the chemical and physical changes there.

By analyzing accurate measurements of the pH, dissolved oxygen, salinity, and temperature within the vertical layers of the water columns identified in the study, the researchers were able to distinguish between chemical patterns in seawater – above and below – and within the kelp forest layer.

They found that the water was less acidic at night compared to daytime measurements, a result contrary to their expectations of monitoring an increase in water pH at night due to kelp breathing, and the researchers attributed this to the rise of acidic, low-oxygen water during the day.

Kelp is an ecologically and economically important primary species in California, with forests of kelp lining the rocky floors of nutrient-rich coastlines.

The phenomenon of ocean acidification is one of the harmful effects of increased carbon in the atmosphere, as it is later absorbed into the ocean waters, having negative effects on the health of the marine environment, including the animals that people depend on for food.

Given its rapid growth of approximately 12.5 cm per day, during which it undergoes a large amount of photosynthesis to produce oxygen and remove carbon dioxide from the water, brown kelp (kelp) has been targeted as a potential species to partially mitigate ocean acidification. .

Although this project examines the kelp’s ability to alter the local environment on a short-term basis, it opens up new avenues for understanding long-term impacts, such as the ability to cultivate “blue carbon”, a strategy based on sequestering carbon dioxide underwater.

Although the effect of these weeds in reducing acidity in the ocean waters did not reach the sensitive organisms at the bottom, they were able to secure a less acidic habitat within the kelp forest system, which could benefit the organisms that live in that canopy or that can To move to it.