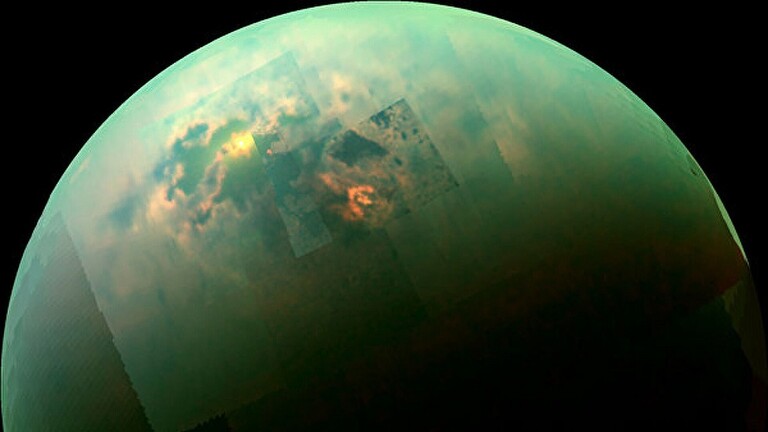 Astronomers have discovered in Titan’s atmosphere, a very rare molecule made up of carbon and hydrogen atoms called cyclopropenylidene (c-C3H2), which does not exist on Earth and has not been discovered on other planets.

The Astronomical Journal reports that Titan is the largest moon of Saturn, and the only celestial body except for Earth is water on its surface in liquid form in the form of seas and lakes, so scientists believe the possibility of life on it.

To search for organic particles in Titan’s atmosphere, astronomers headed by scientist Connor Nixon of NASA’s Goddard Space Flight Center used the ALMA radio telescope installed in the Atacama desert in Chile, and they discovered in the thin upper layers of it an unknown complex spectrum, and after comparing it with the database of chemical compounds it became clear It is the organic molecule cyclopropenilidine C3H2, which is obtained on Earth only in laboratories, and which does not stay free for a long time because of its rapid reaction with other molecules.

Scientists are particularly interested in this compound because its ring-shaped molecules are made of three carbon atoms, and it was perhaps the building block of the more complex organic molecules that led to the emergence of life on Earth.

“The cyclic nature of cyclopropenylidine opens an additional branch of chemistry that allows the creation of biologically important molecules,” says Astrobiologist Alexander Tellin.

“Titan is unique in the solar system, and it has proven to be a treasure trove of new molecules,” Nixon adds. “We look at Titan as a real laboratory, where you can see chemistry similar to that of ancient Earth when life was born on it.”