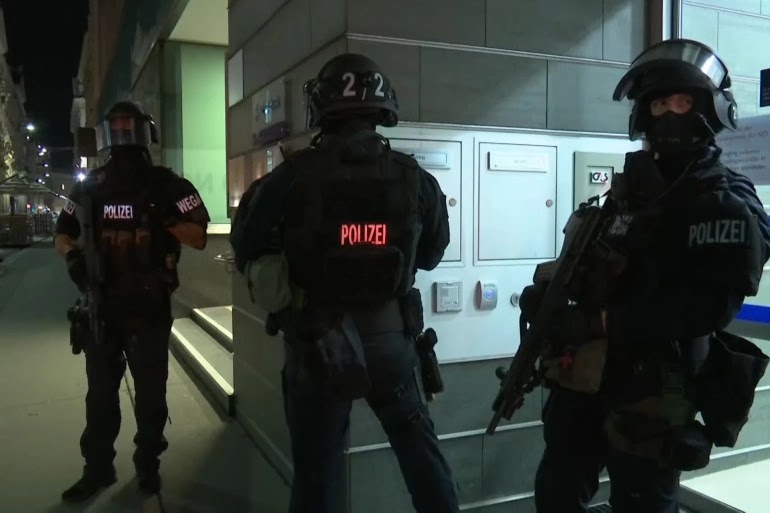 Austrian media reported that two people were killed and others wounded in an armed attack in the center of the capital, Vienna, while the police called on citizens to avoid public places, after the attack, which occurred near a synagogue.

Austrian media reported that the attack was carried out by a number of gunmen. One of them was killed and another was arrested, while the rest fled, while security sources confirmed that several attacks occurred simultaneously, including the taking of hostages in a restaurant.

Reuters reported – quoting Interior Minister Karl Nihamer – that a police officer was seriously wounded in the shooting in central Vienna.

Nihamer said that there are many injured, and possibly dead as well, indicating that it is difficult to make more accurate data at this moment.

And the rescue service in the Austrian capital, Vienna, announced that the possible terrorist attack that took place in the heart of the city resulted in several deaths and injuries.

A spokesman for the rescue service said, “We cannot yet determine the numbers, and we are preparing a general picture of the incident.”

An Austrian police spokesman said the police were currently spreading heavily in the center of Vienna.

The attack took place in the center of Vienna, in an area called Schwedenplatz or Sweden Square, and all official and media sources did not confirm whether the Jewish temple was the target or not.

Reports received so far indicate that 3 attacks have occurred simultaneously; The first was in Sweden Square, and the second was the taking of hostages inside a restaurant in a nearby area, and the third attack took place in a park called Statpark.

Sources close to the police were quoted as saying that the attacker who was killed was wearing an explosive belt.

Videos broadcast by the station “OE 24” showed a masked sniper firing at least two shots in an open street.

In another section, there is a large blood pool opposite a restaurant.

For his part, the head of the Austrian Jewish community, Oskar Deutsch, said on Twitter that “it is not clear if the temple and the neighboring offices were the target of the shooting, as they were closed at that time.”

A witness said in response to a question by a television channel that he saw “a person running with a machine gun, and he was firing brutally.” The police arrived at the scene and responded. Another witness reported that “at least 50 bullets” were fired.