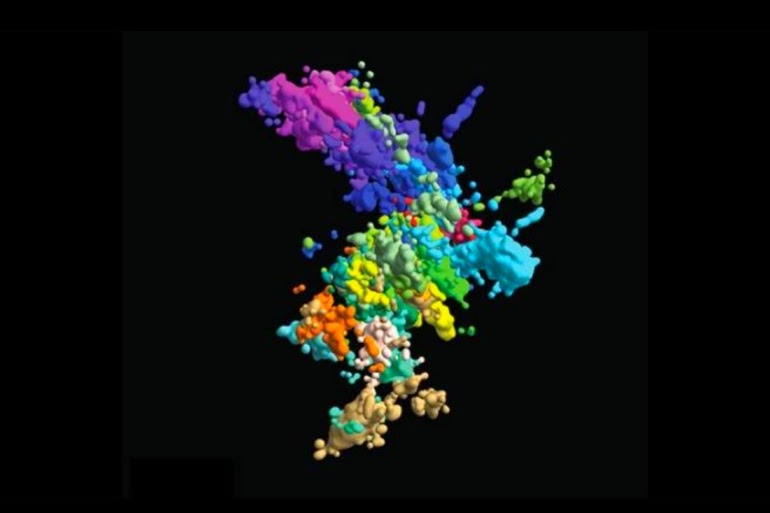 Whatever your specialty, you must have a mental picture of what the chromosome is supposed to look like, or the chromosome, which is usually likened to the letter “X” in English, because this famous form is one of the basic information in biological sciences that is taught in education. Pre-university degree in all countries of the world.

But this stereotype is about to change, and the shape of the chromosome will change in the minds of new generations, after a team of researchers created a new way to visualize the three-dimensional organization of the chromosome in human cells, which gave us an accurate understanding of the chemistry of the chromosome more than ever before, and their study was published in the journal Cell.

By using a high-resolution three-dimensional imaging system, and by collecting multiple snapshots of the genetic sites along the DNA strings, researchers, led by John Han Soo from the Department of Molecular and Cellular Biology, at the Howard Hughes Medical Institute, Harvard University of America, were able to photograph chromosomes from Close in a way never before, and they were able to get a closer look at aspects of the transcription activity.

One of the basic information in biological sciences is that chromosomes are found in the cell nucleus of eukaryotes, which are an organized bundle of structure and structure consisting mostly of DNA, and usually associated with several structural proteins called histones.

A person has 46 chromosomes in each autosomal cell arranged in the form of 23 pairs, and each pair is connected to each other at a point near the center called the centrosome, and the chromosomes can usually be seen under a light microscope only when the cell is in the next phase of cell division, when all the chromosomes meet in The middle of the cell.

The term “chromatid” is usually given to one penis that communicates with the other penis in the pair. For ease of use, we used the term chromosome to describe the united chromatids, and the new copy of each chromosome is linked to the original chromosome through the central division region, which gives the chromosome a shape similar to the multiplication sign or the letter “X” “.

Right now, the chromosomes don’t look what you think of them, so now we have a 3D image of what they look like. “90% of the time, the chromosomes do not exist like this,” says Sue in the press release published on the Eurek Alert website.

“It is very important to define the three-dimensional organization to understand the molecular mechanisms underlying the system, and also to understand how it regulates the function of the genome,” said lead researcher Xiaowei Zhuang, from the Howard Hughes Medical Institute, Department of Chemistry and Chemical Biology, and Department of Physics from the same university.

“We envision a wide application of high-throughput, multi-band, and multi-media imaging technology that provides an integrated view of chromatid regulation in its original structural and functional context,” the team explains in their paper.

Using this technique, researchers tracked chromatids on a genome scale and simultaneously imaged more than a thousand genomic sites. This technique that provides an integrated view of chromatid organization in its original structural and functional context may see expanded scientific applications in the near future.