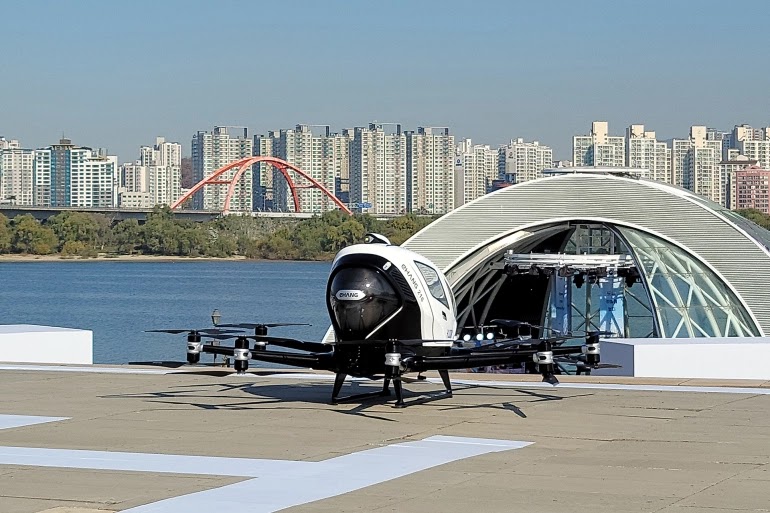 Journalist Rafael Rashid posted a video clip, through his personal account on Twitter, for the first test flight of a “flying taxi” without a driver in the sky of the South Korean capital, Seoul.
And he wrote in his tweet, “A flying unmanned taxi that can accommodate two seats appeared in Seoul today, and it is (the first time) that an unmanned taxi has flown in the sky of South Korea.”
He added that the “EH216 flying taxi” (EH216), developed by the Chinese company Ehang, flew about 1.8 kilometers near the Han River, 50 meters above sea level, for about 7 minutes.
“The city government will do its utmost to ensure that the human dream of unmanned flight in the sky is safely fulfilled as a reality for the citizens of Seoul and to support the future industry of Korea,” he quoted in another tweet.
According to the local newspaper “Korea Herald” (korea herald), this project is part of the future system of traffic management, which depends on air transport, and is scheduled to begin implementation by 2025.

The EH216, developed by China’s Ehang, flew 1.8km near the Han River at 50m above sea level for about 7 mins. pic.twitter.com/CDMdWwcVDa

South Korea intends to use the air transport system to extinguish fires beginning in 2023, amid expectations of creating more than 160,000 jobs and achieving profits of more than $ 20 billion through the new system by 2040.