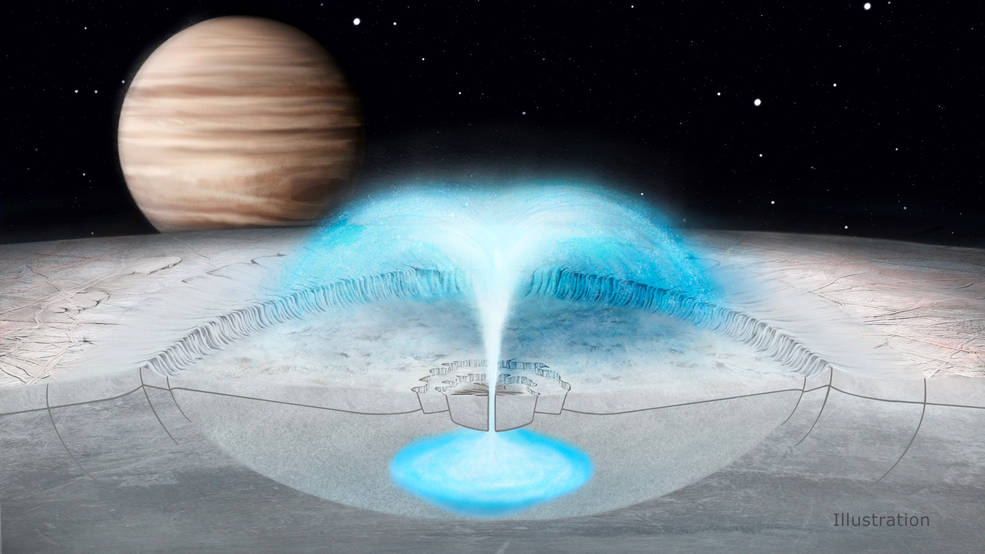 Europa, or Jupiter II, is the smallest of the four Galilean moons orbiting Jupiter, and the sixth-closest to the planet of all the 79 known moons of Jupiter. It is also the sixth-largest moon in the Solar System.

Scientists have theorized on the origin of the water plumes possibly erupting from Jupiter’s moon Europa. Recent research adds a new potential source to the mix.

Plumes of water vapor that may be venting into space from Jupiter’s moon Europa could come from within the icy crust itself, according to new research.

A model outlines a process for brine, or salt-enriched water, moving around within the moon’s shell and eventually forming pockets of water – even more concentrated with salt – that could erupt.

Europa scientists have considered the possible plumes on Europa a promising way to investigate the habitability of Jupiter’s icy moon, especially since they offer the opportunity to be directly sampled by spacecraft flying through them.

The insights into the activity and composition of the ice shell covering Europa’s global, interior ocean can help determine if the ocean contains the ingredients needed to support life.

This new work that offers an additional scenario for some plumes proposes that they may originate from pockets of water embedded in the icy shell rather than water forced upward from the ocean below.

The source of the plumes is important: Water originating from the icy crust is considered less hospitable to life than the global interior ocean because it likely lacks the energy that is a necessary ingredient for life. In Europa’s ocean, that energy could come from hydrothermal vents on the sea floor.

“Understanding where these water plumes are coming from is very important for knowing whether future Europa explorers could have a chance to actually detect life from space without probing Europa’s ocean,” said lead author Gregor Steinbrügge