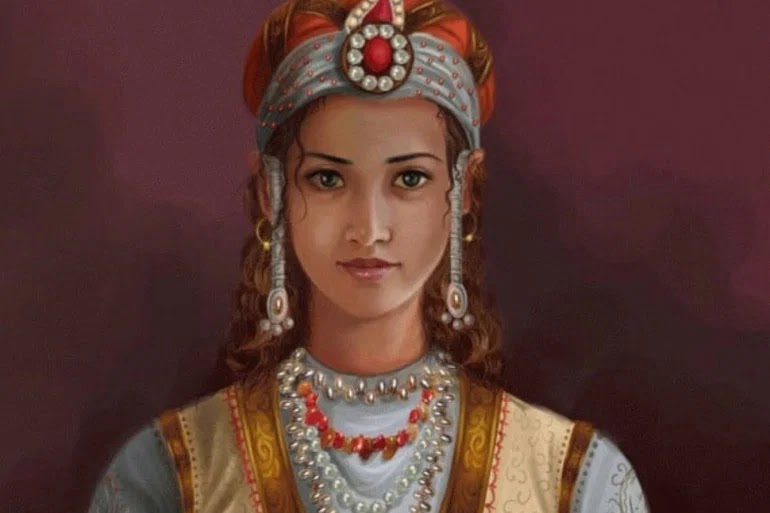 Fate had a different fate for her than all the girls of her time. In the 13th century, at a time when power was associated with men, Radhia – despite the presence of her male brothers – was crowned Sultan over the Muslims in a piece of Asia.

Sultana Razia was the first woman in the Delhi Sultanate, who defied all odds to ascend the throne, wore men’s clothes, called herself “Sultan”, minted coins with her titles and pictures, and ruled between people with justice and strength.

From slavery to the sultanate

In 1205, in the palace of Shams al-Din Iltutmish, the third ruler of the Delhi Sultanate in India, Radhia, or “Razia” as it was called, was born.

Her ancestors were Turkish slaves. Her father, “Shams al-Din”, entered Delhi as a slave during the reign of Sultan Qutbuddin Aybek, and impressed the ruler with his efficiency, appointing him a regional governor.

Shams al-Din’s rise was not only administrative and military, but it was preferred by the sultan who emancipated him and his daughter, Terkin Khatun, to become a member of the ruling family and installed the third Delhi Sultan after the death of AIPAC, according to Mvslim.

Razia was the only daughter of her father, the Sultan, and, like her male brothers, she was trained in professional combat and equestrian, and she learned military skills, and acquired a good knowledge of how the state operates and administers it.

Her father was interested in instilling these skills in his favorite daughter, to help her be a good wife and mother to a line of princes, and he himself did not know that she would be a strong ruler.

Sultan Shams al-Din felt al-Tammesh in an extreme lake after 25 years of rule, and he was lying on the deathbed of his eldest son and heir Nasir al-Din Mahmud, who was the ruler of Bengal.

The dying sultan did not consider any of his surviving sons competent to rule, and on his deathbed the sultan rewrote history – defying all customs and traditions – by nominating his daughter as his heir.

The Sultan preferred Radhia to succeed him, but after his death the competition for the transfer of power was relentless and merciless, and Razia was not supported by the court of the Nobles, which refused to be ruled by a woman.

All this conflict took place in less than a year after the death of the Sultan, and his son Rukn al-Din ascended the throne for only 6 months and 28 days, before he was defeated by his unmarried sister Radhia, at the age of 31, who became the first sultana in Delhi, according to the Cambridge University website. ).

The Sultan is a woman

Razia took power and was bold and daring, and she was leading her army on the battlefields.

During her childhood and adolescence, she was not forced into the timid and reserved behavior of women of that era, and she did not interact with women in the “harem” space in the palace.

Banda dealt with other sultans, and won battles to seize various territories.

Her gender was never an excuse, and in order to erase its effect on others, she wore men’s clothes, refused to be called “Sultana” and preferred the title “Jalal al-Din al-Sultan Radhia”, and made coins bearing her name and titles as “Queen of the Ages” and “Sultan Radhia” , And “Shams El Din’s daughter, Tameshim”, according to Ancient-origins.

Years of love and enmity

Delhi witnessed a cultural and civilizational renaissance during the rule of “Radhia”, which lasted only 4 years, when it ordered the construction of roads linking villages and cities. It even canceled the tax that was collected from the Hindus, struck coins in its name, took care of education and culture, and established schools, academies, public libraries and research centers. .

Razia’s superiority and her success in running the country earned her great popularity, as well as more enemies and conspirators.

Jealousy had reached its zenith among many nobles who felt that having a woman in the position of Sultan was tantamount to humiliating warriors and male nobles.

One of these nobles was Malik Akhtar Al-Din Altunia, the ruler of the city of “Pathinda” in India, and according to “Thebetterindia”, he devised a plan to help her brother, “Moezuddin Bahram Shah” to assume the throne, and this was a shocking surprise considering that Altunia was one of Razia’s best childhood friends.

A miserable end in 35

Razia fought fiercely with her army against him, but suffered a miserable defeat, and was imprisoned in the fortress of “Mubarak” in “Bathinda”. Meanwhile, her brother declared himself Sultan of Delhi.

It is believed that the reason why Altunia turned against her was his feeling of jealousy, when some nobles claimed that there was an emotional relationship between Razia and her slave called “Jamal al-Din Yakut,” and he moved Altunia, who had great love for her since childhood.

Therefore, Razia’s imprisonment did not last long, as she married Altunia and urged him to fight with her to regain the throne. In 1240, they marched to Delhi in an attempt to reclaim its lost kingdom, but was defeated again and forced to flee.

On her escape, Razia was killed when she was 35, and one of the stories claims that one of the Hindus captured Razia and her husband and killed them, while the most common theory – according to “The Peter India” – is that her brother Bahram executed them after their arrest.