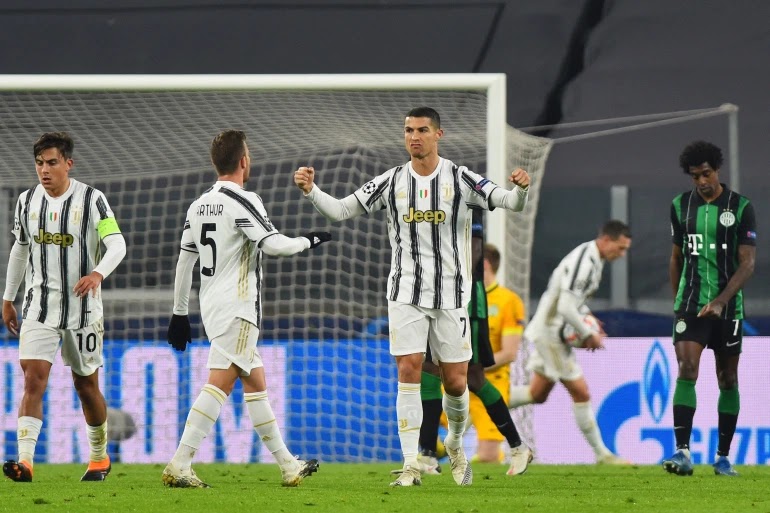 Barcelona and Juventus qualified for the final of the European Champions League, and Brazilian star Neymar saved his Paris Saint-Germain team from a possible exit from the competition and led them to beat Leipzig 1-0.

And within the fourth round matches of Group Seven, Barcelona returned with a big win from Dynamo Kiev, Ukraine, 4-0.

The Catalan club entered the match with a squad that many of the main players missed due to injury or exclusion due to technical decisions, and the confrontation was settled with goals scored in the second half by Sergio Dest in the 52nd minute, Martin Braithwaite in the 57th and 70th minutes from a penalty kick, and Antoine Griezmann in the second minute of injury time. For the match.

In another match in the same group, Juventus beat Hungary’s guest Frenkvarrozi 2-1. Mirto Ozoni opened the scoring for Fernquarrozzi in the 18th minute, then Portuguese star Cristiano Ronaldo equalized for Juventus in the 35th minute, and substitute Alvaro Morata settled the match and qualified for Juventus with a 2-1 victory in the second minute of the match’s stoppage time.

Barcelona raised its score to 12 points at the top of the standings, 3 points behind Juventus, while Frenkvarrozi’s balance was frozen at one point, equal to that with Dynamo Kiev, Ukraine.

In Group H, Manchester United approached a new step of qualifying by beating Istanbul, Turkish Basaksehir 4-1, and Neymar led Paris Saint-Germain to victory over Leipzig, Germany, with a single goal from a penalty kick in the 11th minute, to give the French club the opportunity to compete for a qualifying card after losing In two matches in the first 3 confrontations in the tournament.

Manchester United leads the Group H standings with 9 points, St. Germain and Summer are solved with 6 points, on goal difference only from Leipzig, while Basaksehir is bottom of the group with 3 points.

On the other hand, the German team Borussia Dortmund came close to qualifying after beating Belgium’s Club Brugge 3-0 in Group F, which also witnessed the Italian Lazio’s victory over Zenit Saint Petersburg 3-1.

Dortmund tops Group F with 9 points from 4 games, Lazio and Summer are with 8 points, followed by Club Brugge in third place with 4 points, while Zenit trails the group with one point.