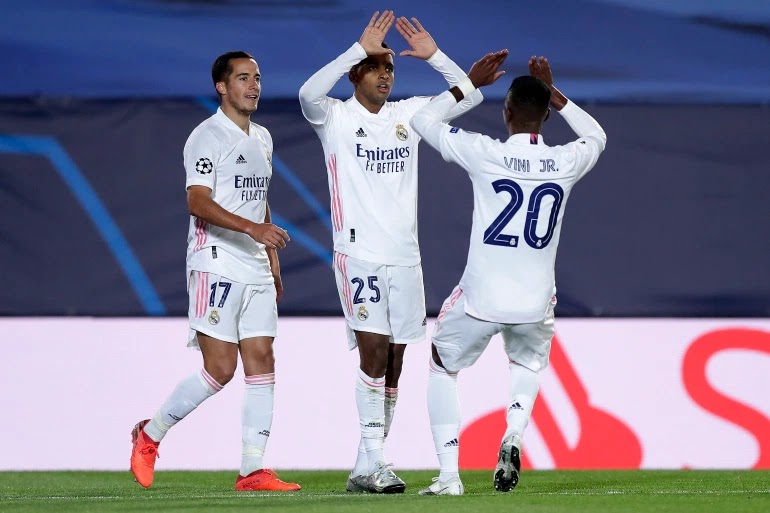 Real Madrid snatched their first victory in the Champions League this season, by defeating their Italian guest Inter Milan 3-2 in the third round of Group Two in the tournament, which also saw Borussia Monchengladbach beat Shakhtar Donetsk with a clean sixth.

Borussia Moenchengladbach tops the group with 5 points, and Shakhtar’s score stopped at 4 points in second place on goal difference from Real Madrid, who has 4 points in third place, while Inter Milan occupies last place with two points.

In Group D, England champion Liverpool continued its strong start in the main continental competition, and achieved its third consecutive victory, by crushing its Italian host Atlanta by five clean, as Ajax Amsterdam achieved its first victory in the tournament, and defeated its host Metjeland Dane 2-1.

Liverpool raised its score to 9 points at the top of the group, 5 points behind second-placed Ajax by 4 points, so when Atlanta stuck at 4 points in third place, and Metjeland remained without balance in last place.

In Group A, Bayern Munich – defending champions – turned from a goal behind Red Bull Salzburg of Austria to a dramatic 6-2 victory. The same group also saw Atletico Madrid draw with their host Lokomotiv Moscow, Russia, 1-1.

The “Bavarian Team” hexagonal was scored by Robert Lewandowski (21 from penalties, 88), Red Bull’s Rasmus Christensen by an own goal (44), Jerome Boateng (79), Leroy Sane (83) and Lucas Hernandez (83) in stoppage time.

In the third group, Manchester City maintained the full mark in the group by beating its home to Olympiakos, Greece, by three goals, while Porto beat French hosts Marseille by three cleans as well.

City won its third successive victory, raising its score in the lead to 9 points, compared to 6 for Porto in second place, and 3 points for Olympiacos in third place, and Marseille remained without a balance of points after suffering the third defeat in a row.