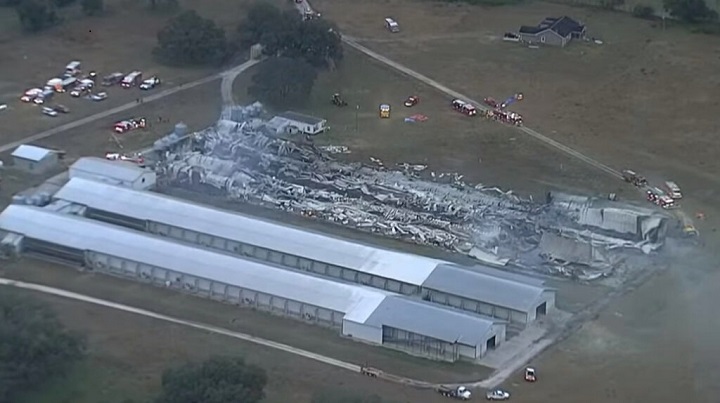 A fire broke out in Florida in three pens, killing a quarter of a million chickens, according to local fire authorities.

Three sheds containing three groups of approximately 60,000 to 80,000 chickens were burned in a fire in Dade, Florida.

The financial loss from the fire, which destroyed two barns owned by Cal-Maine Foods in Dade City, Fla., was estimated at $1 million, officials said.

Sean White, head of the Pasco County Department of Fire and Rescue Operations, said firefighting crews were still digging and discovering hot spots in the wreckage of the two-story barns, noting that firefighters had encountered a problem putting out the flames.

The Barns That Have Burned is owned by Cal-Maine Foods, one of the largest suppliers of eggs in the United States.

“It is completely unacceptable for the industry to tolerate massive numbers of animals burning to death when there are effective fire prevention and suppression strategies available,” Dena Jones, farm animal program director for the group, said in a statement two days before the fire in Florida.