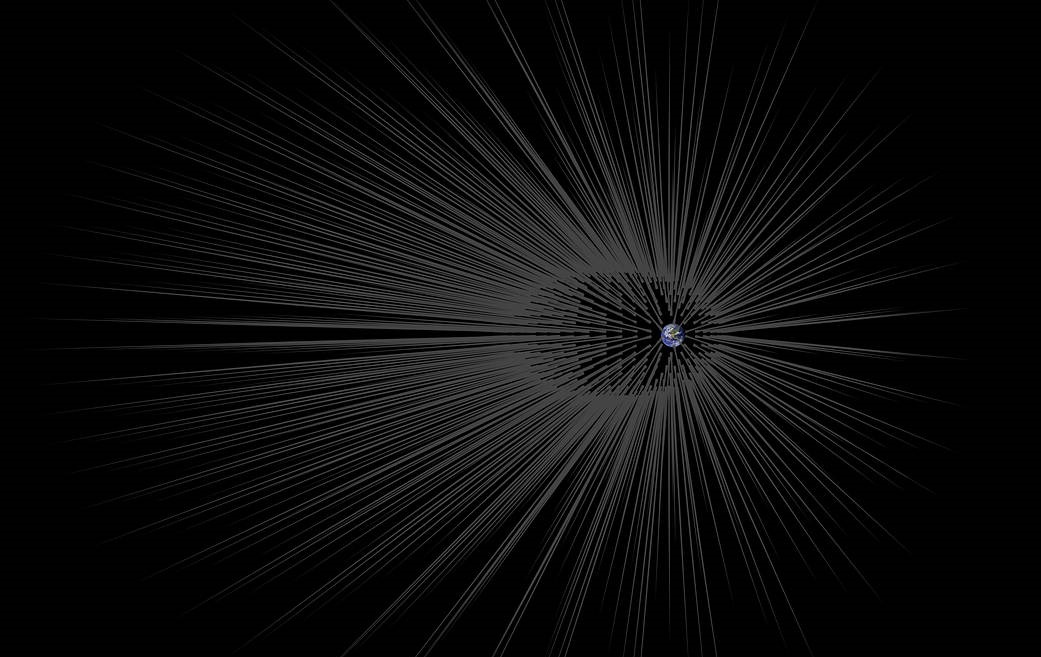 NASA released an intriguing photo showing the Earth spreading “filaments of dark matter” in yet another puzzling twist on the elusive subject.

Although it is not known exactly what dark matter is, scientists know that it is essential to the universe. NASA and scientists believe that dark matter is an invisible force that brings galaxies and clusters together, and was a key in the origins of the universe, The substance also adds mass to the galaxy, but it is a mass that cannot be seen or discovered with scientific tools.

Dark matter is an invisible, mysterious substance that makes up about 27 % of all matter and energy in the universe. The regular matter, which makes up everything we can see around us, is only 5 % of the universe. The rest is Dark energy, a strange phenomenon associated with the acceleration of our expanding universe.

NASA scientists have now revealed that the Earth may contain strings of “hairy” dark matter originating from the planet.
And in a computer-generated image, one can see thousands of these filaments emerging from the surface of our planet
According to accounts of the 1990s, dark matter forms “fine-grained streams” of particles that move at the same speed and orbit around galaxies like ours. However, experts at NASA wanted to know what happens when one of these streams hits a planet like Earth.
Gary Prezzo of NASA’s Jet Propulsion Laboratory in Pasadena, California, found that these currents condense into very dense filaments, or “hairs,” of dark matter.
He said: “When gravity interacts with cold dark matter gas during the formation of the galaxy, all the particles inside the stream will continue to move at the same speed.”
According to scientists, dark matter filaments  has “roots” when it passes through a planet that will be the densest part of the current. Hair was flowing across the planet, leaving “limbs” emerging from the surface.
“If we could locate the root of these filaments, we would probably send a probe there and get a plethora of data about dark matter,” Prizo said.
By proving the existence of these hairs, it could help map the interior of distant worlds.
“In theory, if this information can be obtained, scientists can use cold dark matter hair to map the layers of any planetary body, and even deduce ocean depths on icy moons,” NASA said.