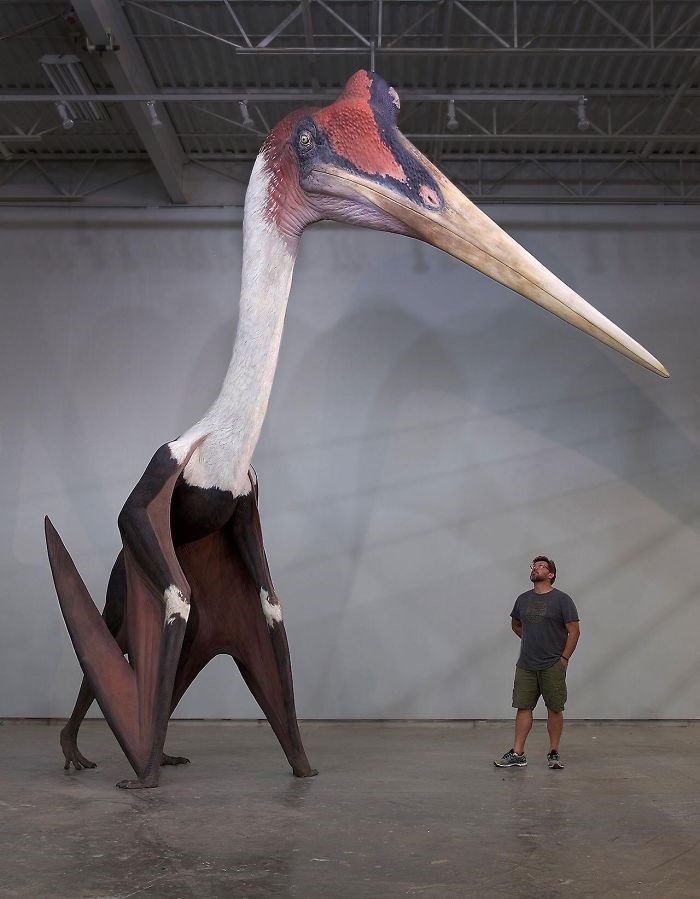 The Quetzalcoatlus northropi dominated the North American skies at the end of the dinosaur age and flew over famous creatures like the Tyrannosaurus and Triceratops.

Very little known, this huge pterosaur is possibly the largest flying animal to ever exist. As big and tall as a giraffe, the size of this flying reptile is absolutely remarkable.

Named in honor of the Aztec god Quetzalcoatl (feathered serpent), the Quetzalcoatlus is the most famous member of the Azhdarchidae family, some large pterosaurs that lived during the Cretaceous era for nearly 80 million years.

These flying reptiles were all very large and had a long pointed skull; some also had a short crest on the back of their cranium.

Their necks and legs were very elongated while their torsos and wings were rather short relative to their bodies.

These animals are known to be predatory, although their hunting mode has long been misunderstood.

Among these giants with wingspans reaching 12 meters is also Hatzegopteryx which was possibly even bigger than the Quetzalcoatlus northropi.

Quetz would have been capable of covering some 10,000 miles nonstop which is like flying from London to Albuquerque and back,  riding rising columns of hot air called thermals and hitting speeds of 80 mph.

Quetz may have been able to stay aloft for more than a week, only intermittently flapping its enormous membranous wings, which were supported, believe it or not, by an extremely elongated finger (alas, not that finger).

Yet it was concluded that neither azhdarchids nor any other flying reptiles were suited for skimming so the hypothesis was dropped, they lacked the jaws and neck structure for such a lifestyle, so any fishing pterosaurs would either have to dive for their prey or simply pluck fish off the water’s surface.

Despite this terrestrial hunting, Quetzalcoatlus and kin were incredible aeronauts. Like all flying reptiles, they launched off the ground in a four-footed leap. This launch style was supported by an immense amount of power.

Quetzalcoatlus’ torso, though small in comparison to its body, was very dense and packed with huge muscles. A single leap could get one of these giants into the air, and it needed just a few flaps to keep it aloft.

They could likely travel nonstop for 16,000 kilometers after launching, only rarely flapping to keep themselves in the air and to steer their path. Its short wings were not just thin membranes of skin, but densely packed muscle fibers called actinofibrils.

Like all other pterosaurs, Quetzalcoatlus was warm-blooded and had an incredible metabolism to power its lifestyle.

Quetzalcoatlus occupied the role of medium-level hunter. It was midway between the contemporary tyrannosaurs and the smaller dromaeosaurs or raptor dinosaurs by way of size and choice of prey.

Two species of this genus existed in the southern parts of North America, specifically in the Javelina Formation of Texas.

The bigger one, the huge Quetzalcoatlus northropi stood as tall as a giraffe on the ground, more than five meters tall and weighed 250 kilograms. This is the maximum weight limit for a flying animal, and only a few other azhdarchids come close to Q.northropi’s size. The smaller species is Quetzalcoatlus sp, an animal just half as big as the giant species. It is also known from much better fossil remains.

Despite being featured prominently in popular culture, it is very poorly known, fossils of Q. northropi have always been scarce, so it has to be reconstructed on the basis of its close relatives.

The skull of this species for example, is unknown and instead the head of the contemporary Q. sp. is used in reconstructions. This results in a creature which is a combination of two species.