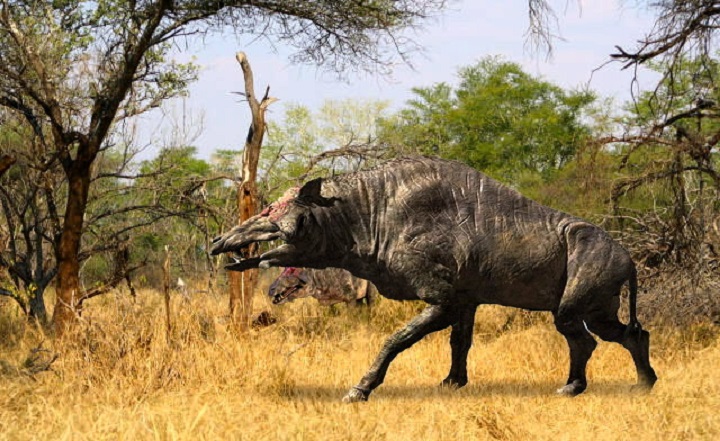 you’ve likely never heard of an entelodont, an extinct species seemingly summoned from the depths of hell. Indeed, the extinct creature is commonly referred to as a “hell pig” — and with good reason.

Entelodonts are an extinct group of rather pig-like omnivorous mammals with bulky bodies, slender legs, and long muzzles. The largest were the North American Daeodon shoshonensis, and the Eurasian Paraentelodon intermedium, standing up to 2.1 m (6.9 ft) tall at the shoulder, with brains the size of an orange.

The species had the long wide jaw of a crocodile replete with a mouth full of teeth. It had a face studded with thick bones for protection in a fight and a stocky frame often rounded into a hump — not to mention demonic cloven hooves. The largest genus of entelodont, known as the Daeodon, could grow up to 2,000 pounds.

Despite their nickname, “hell pig,” the entelodont has no relation to modern pigs as evolutionarily, they’re closer to hippos or whales.

The terrifying beasts went extinct between 19 and 16 million years ago. Originating in Mongolia in the middle Eocene epoch, these hell pigs spread to Europe and even to North America and existed for nearly 30 million years. 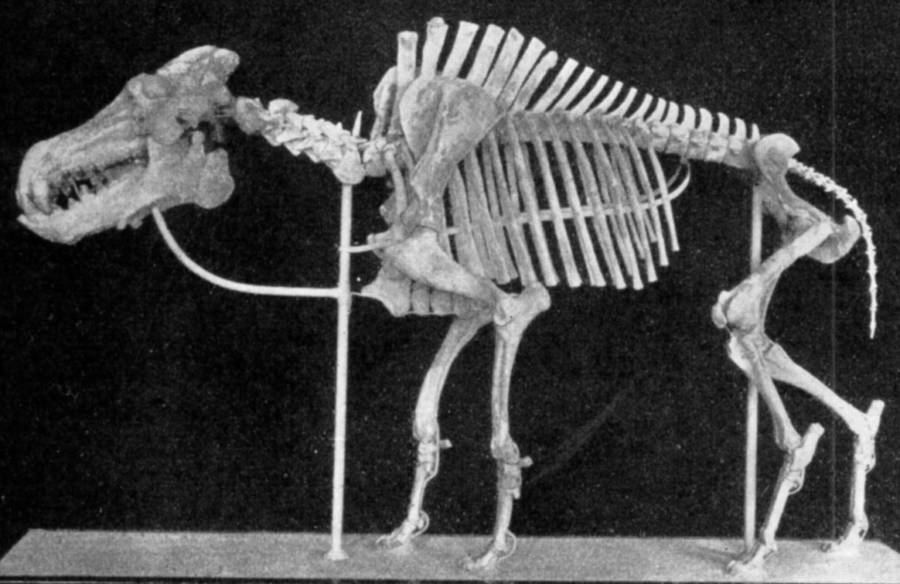 Paleontologists have uncovered fossils from one of the largest breeds of entelodont, called Dinohyus or Daeodon, in Nebraska, with other fossils having been discovered in central states like South Dakota and Wyoming. It is believed the roaming hell pig likely enjoyed floodplains and woodlands.

The fossils look just like the bones of an enormous dinosaur. The skeleton has huge teeth, a long snout, and deep-set eyes. In some cases, the head of the hell pig took up 35 to 45 percent of the creature’s total body mass and it’s believed that a hell pig could put another’s head directly into its mouth during a fight.

Even the smallest entelodonts were likely the size of an adult male deer and the largest rivaled a Clydesdale horse. The entelodont was the largest species to live in North America since the dinosaurs.

With their long snouts full of teeth, enormous body mass and cloven hooves, an entelodont appeared to be ascended from hell itself. But the largest species of the entelodont is even more nightmarish: meet the Daeodon, whose name roughly translates to “hostile” and “tooth.”