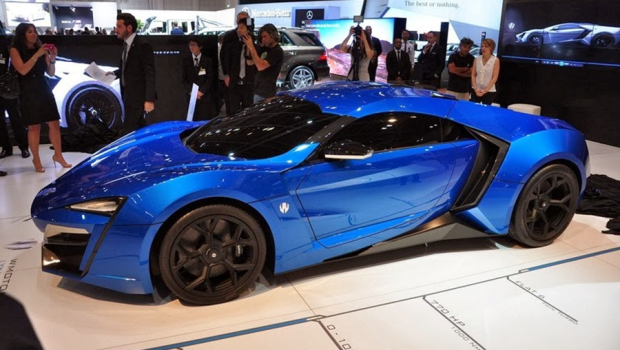 This is another level of cars , With increasing concerns about emissions, air quality and the ‘speed kills’ mantra ever more pervasive within Government and sections of the press, you might expect that the hypercar is living on borrowed time. Indeed, you could well conclude that it has been ever since the McLaren F1 burst onto the scene with its headline-grabbing 240.1mph top speed.

Fortunately this doesn’t seem to be the case and, if anything, the hypercar is currently enjoying something of a renaissance with the likes of Bugatti and Koenigsegg setting top speed and acceleration records seemingly just for the hell of it.

The truth of the matter is that hypercar buyers have never had it so good with manufacturers embracing more modern and race-derived technologies to ensure the current crop of hypercars are just as desirable and mind-bogglingly fast as we’ve come to expect. 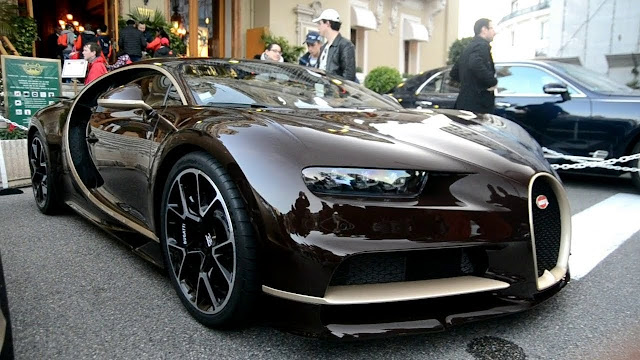 If you accept that first and foremost a hypercar has to have epic performance then it should be no surprise that the Chiron is sitting at the top of our hypercar tree. It’s mindwarpingly savage in its acceleration – nothing with four wheels connects corners quite as effectively – perhaps unsurprising given the numbers generated by its quad-turbo W16. 8-litres in capacity and developing an eye-watering 1479bhp and 1180lb ft of torque the Bugatti Chiron dispatches the 0-62mph segment in 2.5sec before crashing through the 124mph barrier a scant four seconds later. Top speed is limited to 261mph.
That the Chiron has the high-tech underpinnings to match its outrageous pace should be a given and with a carbonfibre tub reinforced with a sliver of aluminium honeycomb it has the torsional rigidity to match an LMP1 car. Blend in a fully adaptive chassis that optimises ride height, aerodynamics, steering and damping and it has an unexpected level of agility too.

> Bugatti Chiron review
There’s bags of grip on offer but there’s more connection through the steering than the Veyron could muster and, fortunately, the 420mm carbon front discs with their eight-pot calipers (along with the Chiron’s airbrake) ensure it stops as well as it goes.
The overriding impression though is of speed, pure unadulterated performance, and our only gripe is that there’s hardly anywhere on the planet you can meaningfully exploit its potential. That and its £2.1 million (before taxes) price tag. 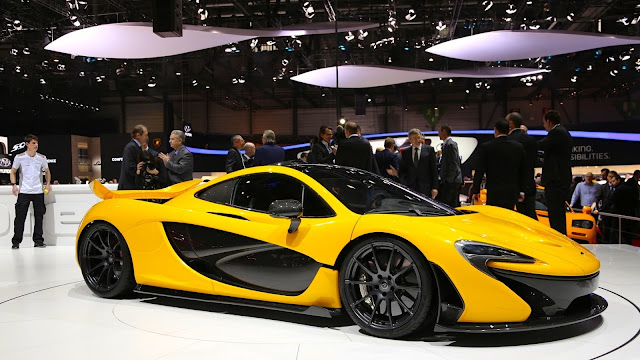 Where the legendary McLaren F1 was a product of an analogue age, the P1 moves the game on in terms of construction (it features a fully carbon Monocage) and its hybrid powertrain. At its heart is the same 3.8-litre V8 you’ll find in other McLarens but for its P1 application it’s been heavily revised and thanks to its twin-turbos it pushes out 727bhp and 531lb ft. Add the electric motor to the equation and it delivers maximum figures of 903bhp and 664lb ft, enough for a 2.8sec 0-62mph time and 0-124mph in just 6.8sec. Quick enough then.
> McLaren P1 review
But there’s so much more to the P1 than outright speed. You won’t find any fripperies here, everything on the P1 is designed with one purpose in mind – to enhance its performance. It’s clever and well thought out – witness the lack of anti-roll bars whose duties are taken on by McLaren’s Race Chassis Control active dampers. They provide the car with superb control and responses yet endow it with a remarkably smooth ride, a combination with imbibes the driver with huge levels of confidence in the P1’s abilities.
It looks dramatic, has an F1-inspired carbonfibre and Alcantara-swathed interior and just about the only downside to the whole package is a modicum of lag from the V8 that the electric motor occasionally struggles to disguise. That and its £866,000 price tag and a production run limited to just 375 examples. 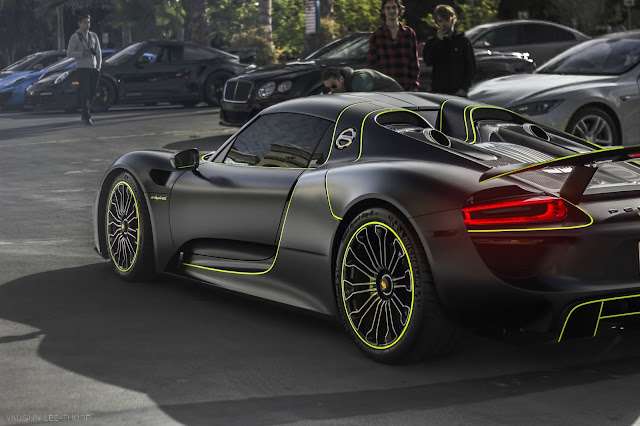 With ‘only’ 599bhp and 398lb ft developed by its glorious 4.6-litre V8 you could be forgiven for thinking the Porsche 918 Spyder would be a little outgunned in this company. Add in its two electric motors though and the 918 is right up there with 875bhp and a staggering 944lb ft of torque, and it’s that latter figure that stops the 918 Spyder from being significantly outgunned by the other two members of the ‘holy trinity’.

It has the performance – 0-62mph in 2.6sec and 0-124mph in 7.2sec – but with the 918 Spyder it’s the seamless way that the four-wheel drive, sublime PDK transmission, twin electric motors and majestic V8 work in combination that makes it such an enjoyable drive. It has impressive eco credentials too – it’ll do 20 miles on pure electric power – but it’s best to remove the roof and revel in that spine-tingling V8 to fully appreciate the 918.

> Porsche 918 Spyder
So, it’s quick, has a brilliant drivetrain, but it’s the 918’s dynamic ability that’s equally impressive. A brilliant EPAS set up and perfectly judged PASM dampers allow you to fully exploit the Spyder’s four-wheel drive grip yet it’s also surprisingly adjustable, giving you complete confidence in the car.
As a complete package the 918 Spyder has few peers and if you were going to contemplate using your hypercar everyday then it would undoubtedly be at the top of your shopping list. You’ll need a £1million plus to join the club though. 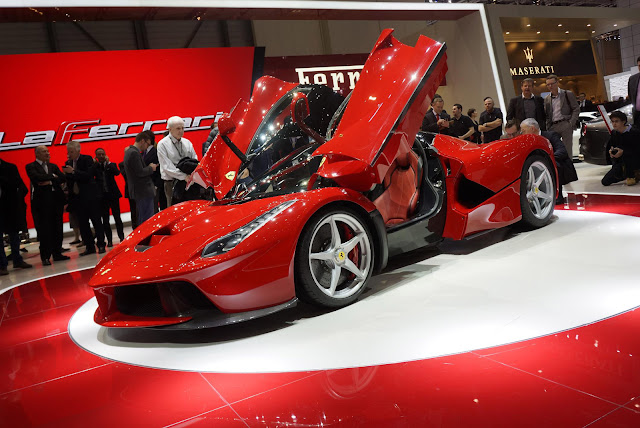 Ferrari’s LaFerrari made up the third prong of the hypercar ‘holy trinity’ and like the Porsche 918 Spyder and the McLaren P1 it used a potent mix of the good, old fashioned internal combustion engine supplemented by an electric motor. Headline figures are mouth-watering. Its 6.3-litre V12 revs to 9250rpm and develops 789bhp and 516lb ft of torque with the electric gubbins adding 161bhp and 199lb ft.

It’s certainly quick enough although Ferrari’s coyness on exact figures seems somewhat ridiculous, quoting times of ‘under 3sec’ for its 0-60mph time and 0-124mph in ‘under 7sec’. The figures are largely academic though as the LaFerrari is dominated by its glorious naturally aspirated V12 with the electric motor being used to torque-fill lower down the rev range.

> Ferrari LaFerrari
With active aerodynamics, Brembo carbon-ceramic brakes and a range of F1-derived technology such as F1-trac and an E-diff, the LaFerrari is a hoot to drive with transparent steering and a perfectly judged blend of grip and handling that actually makes it a remarkably driver-friendly hypercar.
Downsides? Not many bar a lack of electric-only running and a £1 million price tag – a figure that’s doubled now all 500 examples have been sold 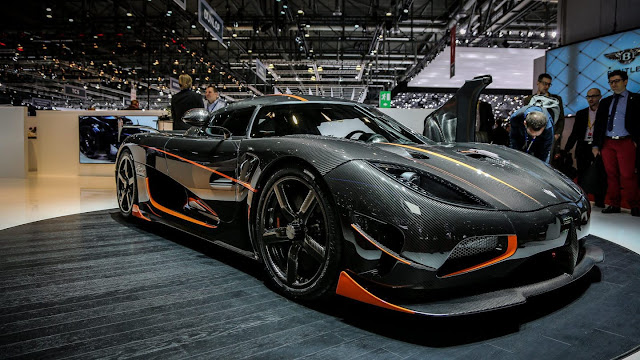 First it was the McLaren F1, more recently there was the Bugatti Veyron Super Sport but now it’s the turn of the Koenigsegg Agera RS – it’s officially the fastest production car in the world with a top speed of 277.87mph.  Prior to its historic top speed run in the Nevada desert the Agera RS had also beaten the Bugatti Chiron’s 0-400-0km/h time – at 36.44 seconds it was over five seconds quicker than the much-vaunted Chiron.

> Koenigsegg breaks Bugatti’s 0-400-0kph record
Its chassis is carbonfibre and aluminium honeycomb while the shapely body is constructed from carbon and Kevlar. It’s relatively practical for a hypercar too – its removable hardtop can be stowed in the car and there’s an almost usable 150-litre luggage compartment.
Just 25 Agera RSs will be built and like most hypercars if you have to ask how much… yup, that’ll be a cool $2 million plus.