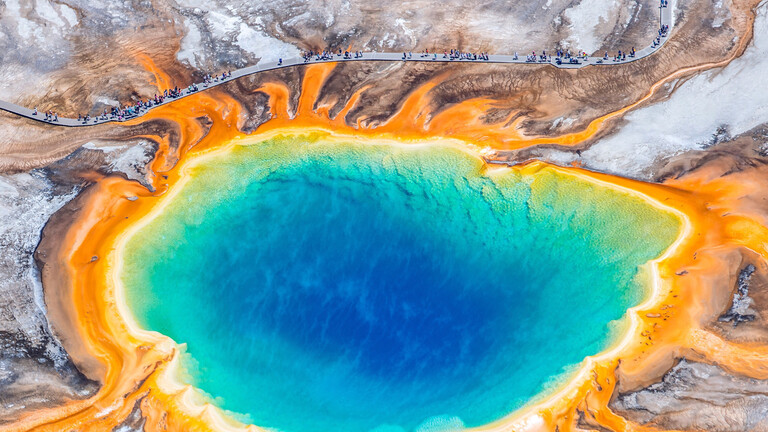 The eruption of the massive Yellowstone volcano could kill up to 90,000 people in an instant and create a dense ash cloud that would drown the plant in a “nuclear winter.”

Although Yellowstone supervolcano in Wyoming look beautiful, researchers believe it has the potential to trigger one of the deadliest explosions in human history, although fortunately for our planet, the supervolcano has remained inactive for more than 600,000 years. But some scientists fear that the sleeping giant may one day wake up and unleash global chaos.

Under Yellowstone, pressure has been accumulating over hundreds of thousands of years. The heat from the depths of the volcano will start to rise, and melt the molten rock just below the surface of the earth.

As the heat from the core rises, it will create a mixture of magma, rocks, steam, carbon dioxide, and other gases.

Eventually, a dome will be built beneath the surface, raising the ground, and becoming visible as it is about to inflate.

If the volcano begins to erupt, the states surrounding Montana and Idaho will be covered in volcanic magma and ash.

According to HowStuffWorks, the initial blast would kill 90,000 people instantly, but that would only be the start of the storm.

The explosion will spread a layer of magma three meters long across 1,600 kilometers. This means that rescuers will struggle to reach the site of the explosion, putting more and more civilians at risk.

“Rescuers may have difficulty getting there. Ash will block all entry points from the ground, and the dispersal of ash and gases into the atmosphere will stop most flights, just as it did when a much smaller volcano erupted in Iceland in 2010,” HowStuffWorks said.

Nuclear winter begins when a lot of ash and debris is transferred from the Earth into the atmosphere.

This could cause a climate shift because the volcano will release massive amounts of sulfur dioxide into the atmosphere, which can form a sulfur spray that reflects and absorbs sunlight.

Ultimately, this would lead to lower temperatures across the planet, which could lead to an inability to grow crops and ultimately famine.

HowStuffWorks noted that the drop in temperatures “will drastically affect our food supply, wipe out crops and throw the food chain into disrepair by leaving those at the bottom with little to no food.”

Fortunately, the chances of a Yellowstone exploding are very low and practically non-existent. The USGS estimates that there is a 0.00014% chance each year that a potentially catastrophic volcano will erupt.