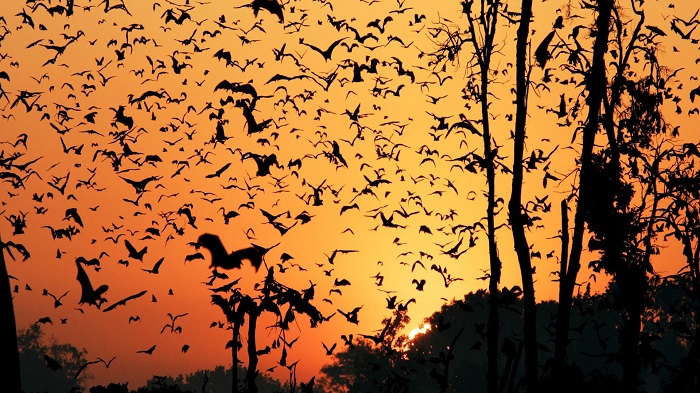 The largest mammal migration in the world -The enormous colony- , according to experts at the Max Planck Institute of Animal Behavior is made up of Africa’s second-largest fruit bats.

During the day, the bats roost in the thick swamp along the Musola River, part of Kasanka National Park, which is home to more than 470 bird species and 100 mammals. As sunset comes, they set off to look for wild berries and fruits, covering about 50km (32 miles) and returning back to their swamp roost at dawn.

The spectacle only takes place once a year, between October and December. But experts say the near-threatened bats, crucial for restoring Africa’s forests, are in danger.

Straw-coloured fruit bats, dubbed “the gardeners of Africa”, are important for the regeneration of woodland forest and Indigenous fruit trees.

They travel thousands of kilometres as a migratory species, but much is still unknown about their migratory routes or why they congregate in such large numbers at Kasanka.

But as pristine areas and national parks become threatened, their habitats are disappearing.

Deforestation is a major issue across Zambia. The Center for International Forestry Research (CIFOR) in Lusaka estimates that the country loses an “alarming” 250,000 to 300,000 hectares (617,763 to 741,316 acres) of forest per year to fuel wood and charcoal production, and clearing for agriculture.

As Zambia largely relies on hydroelectric power, a recent drought has exacerbated demand for fuel, with an estimated 90 percent of the population depending on wood for energy.

Combined with population increase and overuse of agricultural land in some areas, human migration in search of virgin forest areas such as Kasanka is a natural consequence, explained CIFOR’s Davion Gumbo.