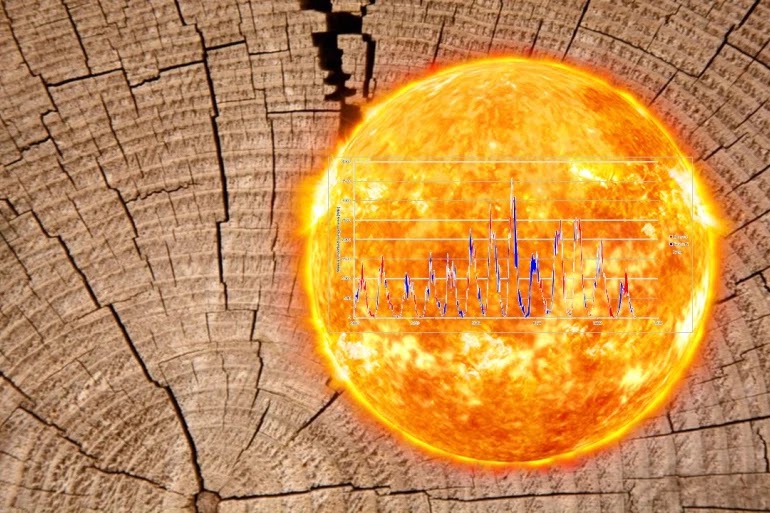 An international team of researchers has reconstructed solar activity with unprecedented precision over the last 1,000 years, using radiocarbon measurements in tree rings.

These results, which revealed solar events unknown to scientists, help scientists better understand the dynamics of the Sun, as well as improve the accuracy of dating organic materials using radiocarbon.

What goes on in the sun can only be observed indirectly. Sunspots, for instance, reveal the degree of solar activity – the more sunspots are visible on the surface of the sun, the more active is our central star deep inside. Even though sunspots have been known since antiquity, they have only been documented in detail since the invention of the telescope around 400 years ago. Thanks to that, we now know that the number of spots varies in regular eleven-year cycles and that, moreover, there are long-lasting periods of strong and weak solar activity, which is also reflected in the climate on Earth.

However, reconstructing how solar activity evolved before the start of the systemic records has remained difficult to this day, so scientists seek to develop innovative methods to study solar activity in the distant past through the effects it leaves on the surface of the earth.

For this purpose, an international research team led by the Swiss Federal Institute of Technology in Zurich (ETH Zurich) according to the institute’s press release, tracked the path of the sun over an 11-year cycle using measurements of the radiocarbon concentration in tree rings.

To reconstruct solar activity over a period of a thousand years with a high time accuracy of which the margin of error does not exceed one year, the researchers used, according to a statement by the Swiss Institute, rings of ancient trees found in England and Switzerland whose ages could be determined precisely by calculating the rings. These organic materials contain an important amount of carbon, including a very small part of radiocarbon, with only one out of every 1000 billion atoms being radioactive

From the known half-life of the C14 isotope – around 5700 years – one can then deduce the concentration of radioactive carbon present in the atmosphere when the growth ring was formed. As radioactive carbon is mainly produced by cosmic particles, which in turn are kept away from the Earth to a greater or lesser extent by the magnetic field of the sun – the more active the sun, the better it shields the Earth – it is possible to deduce solar activity from a change in the concentration of C14 in the atmosphere.

Regular cycles in a thousand years

Using an advanced spectrometer, the researchers reconstructed the entire solar activity over the period between 969 and 1933 AD.

The results obtained allowed them to confirm the regularity of the solar activity cycle every 11 years, and revealed that the disparity in the intensity of activity between apogee and perihelion during one cycle increases with the increase in solar activity and contracts during periods of decline. This new observation will allow scientists to better understand the inner dynamics of the sun, according to the researchers.

The results of the study also confirmed some exceptional solar events, such as the one that occurred in 993 and called the “Solar Particle event”, during which the sun threw high-energy particles such as protons into space. These particles, if they reach the ground, lead to a slight increase in radiocarbon production.

The authors of the study revealed two other previously unknown events of this type that occurred in 1052 and 1279, indicating that such events, which could interfere with and disrupt electronic circuits on Earth and satellites, occur more frequently than previously thought.

Given the existence of tree ring archives over the past 14,000 years, researchers want in the near future to use their method to determine annual radiocarbon concentrations from the end of the last Ice Age to today.

The researchers emphasized that the data contained in the new study can be used to more accurately date organic matter using radiocarbon. This data has already been included in the latest release of the internationally recognized radio carbon calibration (IntCal) curves.