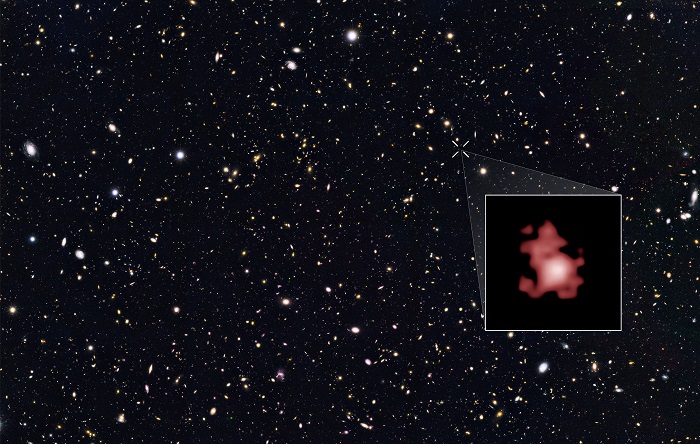 Since time immemorial, philosophers and scholars have contemplated the beginning of time and even tried to determine when all things began. It’s only been in the age of modern astronomy that we’ve come close to answering that question with a fair degree of certainty. According to the most widely-accepted cosmological models, the Universe began with the Bang Bang roughly 13.8 billion years ago.

However, astronomers are still unsure of what the nascent universe looked like during this early period, which has been dubbed the cosmic “dark ages”.

But after pushing advanced tools to their limits, astronomers are now rewarded with discovering the oldest and farthest galaxy ever observed.

It is known that the cosmic dark ages began 370,000 years after the Big Bang and continued for another billion years. 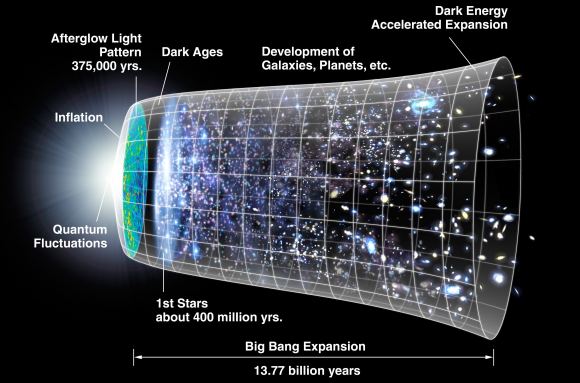 The only light sources during this period were either the photons, which are still detectable today as a cosmic wave background, and the emissions from neutral hydrogen atoms.

The expansion of the universe means that the light of these photons has shifted to the point where they are largely invisible to astronomers.

This effect is known as “redshift”, and it is not unlike the Doppler effect, in which the wavelength of light is lengthened – or “shifted” – toward the red end of the spectrum as it passes through the rapidly expanding universe.

And the objects approaching our galaxy, cause the opposite effect. This causes the wavelength to shorten, and move toward the blue end of the spectrum, in a phenomenon known as a “blue shift”.

Astronomers have long used these effects to accurately calculate the distance of galaxies and the expansion rate of the universe.

New results obtained with the help of the Keck I telescope in Hawaii confirm that GN-z11 is the farthest galaxy – and thus the oldest – so far.

Professor Nobunari Kashikawa of the University of Tokyo, one of the main authors of the study, said in a statement: “From previous studies, it appears that GN-z11 is the most distant galaxy that can be discovered, at 13.4 billion light-years.

The researchers examined the lines of carbon emissions emanating from GN-z11, located in the ultraviolet range as it left the galaxy, before dramatically changing the infrared end of the scale by the time it reaches Earth.

This big red shift indicates that this galaxy was present about 13.4 billion years ago – only 400 million years after the Big Bang.

Thus, GN-z11 is so far away that it actually defines the boundaries of the observable universe.

Although this galaxy was already observed by NASA’s Hubble Space Telescope, the Keck Observatory has now only been able to make accurate measurements.

Specifically, MOSFIRE allowed researchers to produce distance estimates optimized by a factor of 100 over previous measurements.

Professor Kashikawa added, “The Hubble Space Telescope has detected traces many times in the GN-z11 spectrum. However, even Hubble cannot solve the UV emission lines to the degree we need. So we resorted to a more modern ground-based spectrometer, an instrument for measuring emission lines, called MOSFIRE.” Mounted on the Keck I Telescope in Hawaii. “

However, astronomers will have to wait much longer before more observations confirm that GN-z11 is indeed the most distant galaxy ever observed.

Astronomers expect such research to speed up rapidly when next-generation telescopes, such as James Webb, begin work.

Ultimately, these tools will allow astronomers to study the incomprehensible “Dark Age” period, with unparalleled precision.