The universe still keeps many secrets about the types of objects and star systems it contains. Including what researchers from the US Space Agency “NASA” revealed about the belonging of one of the exoplanets to a strange star system consisting of 3 suns.

This discovery came, according to a statement by NASA, in the context of confirming the existence of an exoplanet called “KOI-5Ab” (KOI-5Ab) that was first found in 2009 from the “Kepler Space Telescope” of NASA and the signal To him then as a potential planet.

This strange object was the second discovery of the Kepler Observatory, shortly after the start of its mission to search for exoplanets between 2009 and 2018.

Kepler used the “transit method” to discover the decreases in brightness that predicted transits by planets in front of their host stars.

Kepler discovered nearly two-thirds of the 4,300 exoplanets known today, and scientists today continue to make new discoveries based on analysis of the huge data set, which the space observatory left after it was retired.

Amidst this huge data, some of which is related to KOI-5Ab, which confirmed that its clear transit signal recorded by the Kepler Observatory in 2009, it may return to a planet almost the size of Neptune orbiting a star similar to the sun every 5 days on Earth, and this system is located The star and the apparent planet, about 1,800 light-years away from Earth, are in the constellation Cygnus.

But further investigations revealed that the parent star had a companion star; This makes analyzes more difficult. Therefore, the study of this star system, “KOI-5” – to which this object belongs – was temporarily abandoned pending the availability of new monitoring methods that help reveal its secrets. 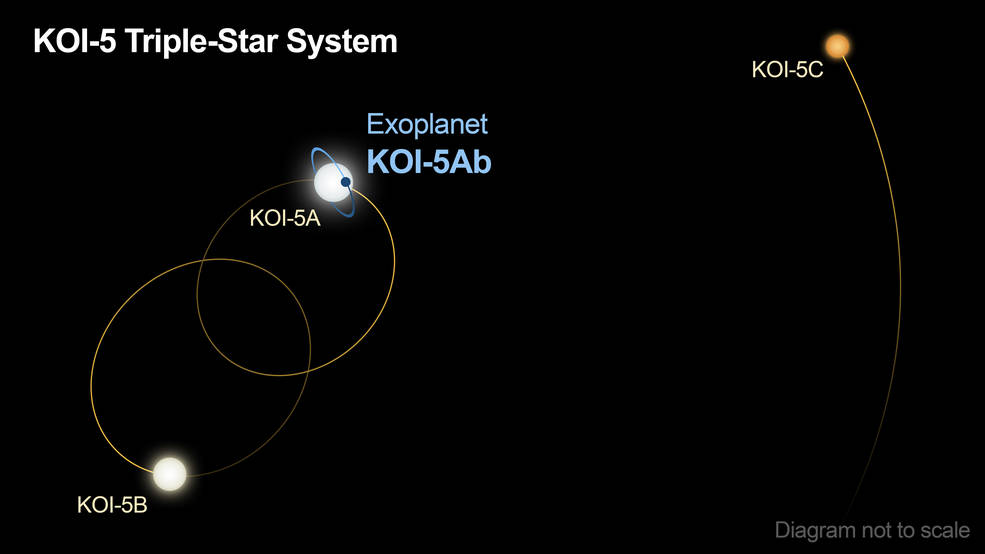 KOI-5 is back in the spotlight thanks to Kepler’s successor, the NASA Transiting Exoplanet Survey-TESS satellite, which was launched in 2018. The new space observatory detected a signal in the system. KOI-5, resulting from a possible planet with an orbital period of 5 Earth days.

This signal prompted astronomer David Ciardi, chief scientist at the NASA Institute for Exoplanet Science, located at the California Institute of Technology in Pasadena, to take a closer look at all available information about the system. Such as transit data recorded by Kepler and TESS, as well as radial velocity data, which were collected by ground instruments such as the Keck Observatory in Hawaii.

Together, these data confirmed that KOI-5AP is indeed a planet half the size of Saturn. The new search also revealed other details of the “KOI-5” system. The most important of them is that it is made of 3 stars, and the planet orbits around the main star (Star A), which has a companion close to it (Star B). This duo orbits each other once every 30 Earth years, and around them a third star (Star C) orbits one revolution every 400 years.

In addition, and contrary to what is known that the components of a single star system usually have orbits in the same plane; Being formed from the gas cloud itself in the beginning.

During the presentation of the discovery at the American Astronomical Society conference on January 11, Ciardi indicated that this planet is not the first of its kind to be discovered in a multi-star system, although such systems host planets less frequently than solar systems with a star One is like our planet, for reasons scientists don’t yet understand.

Scientists still have many questions about how and when might planets form into multi-star systems. By studying the KOI-5 system in more detail, it may be possible to get an insight into how planets form in the universe, says Ciardi.