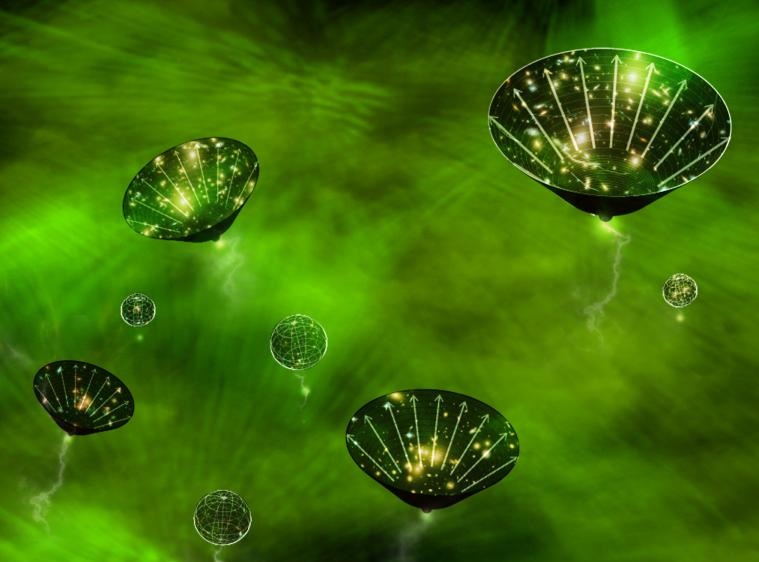 Through a new mathematical model, a joint American-Japanese research team is trying to reconsider the possibility of primordial black holes between our galaxy and its neighbor “Andromeda”, in the hope that this will help confirm the existence of universes other than ours.

Primordial black holes is a hypothesis that appeared in the 1960s by Russian physicists Igor Novikov and Yakov Zeldovich, Says that the universe, in the first moments of its development, could allow the emergence of black holes.

We know that black holes form when a giant star collapses in on itself, but the theory of black holes is more general than stars, because compressing any amount of material so that its size shrinks to cross a specific barrier will turn it into a black hole. For example, by shrinking Our Planet Earth to the size of a baseball , it will instantly become a black hole.

And because the universe in its early moments was extremely dense, with extremely intense pressure and heat, it is possible that very large numbers of black holes had formed in it.

Stephen Hawking – one of the most prominent theoretical physicists and cosmologists – had suggested in the 1970s that these primitive black holes are the reason for what we now observe as “dark matter”, those that scientists notice its gravitational effect on its surroundings but are unable to see.

Primitive black holes are too small to be observed, but they are of a large mass that can affect their surroundings.

At that point, the new research paper, published in Physical Review Letters, and announced in a press release issued on December 24th by the Japanese research institution, IPMU, appears at that point. As long as these primordial holes are scattered throughout the universe, they can be detected by focusing on a relatively close target.

The members of this research team intend to use the high-resolution camera in the Subaru Telescope located at the summit of Mauna Kea in Hawaii in the United States, to make an accurate observation of the Andromeda Galaxy, our neighbor, which is 2.5 million light-years away from us.

If certain differences in the stellar radiation of the Andromeda galaxy appear in the “Subaru” telescope during 88 hours of imaging, it is likely that this is due to the passage of primordial black holes between the two galaxies, affecting the star radiation that reaches us.

But this new study builds itself on the hypothesis, more strange than Hawking suggested, that the desired black holes formed during a period during which the universe was expanding in an unprecedented way.

The assumption is that during this expansion, “Baby Universes” arose as branches of our universe, but they soon collapsed in themselves, leaving primitive black holes in their place.

Based on that hypothesis, this research team built a mathematical model that predicts a certain percentage of changes in the star’s radiation in the Andromeda galaxy, which the Subaru telescope can observe with its 8.2-meter-diameter mirror. And if scientists can actually prove their existence, that opens the door to new physics for cosmology.