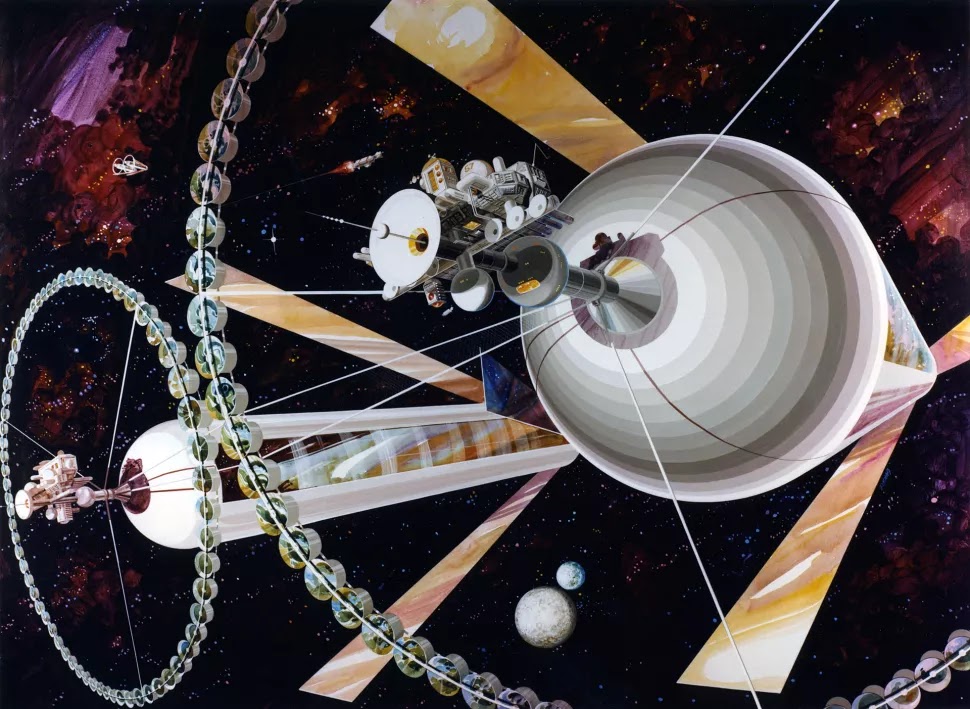 What is the best place in the solar system to establish a human colony in space with the basic subsistence available? According to a Finnish researcher, this place is neither on the moon nor on Mars. It is a space station orbiting the planet “Ceres”, which is located between Mars and Jupiter.

Here is a picture of this alternative habitat as he described it in a scientific study published by the researcher recently on the arXiv website, in which he explained the scientific reasons for this choice.

Imagine a gigantic structure made up of thousands of cylindrical devices, all connected to a disk-shaped frame by magnetic stabilizers that orbit the dwarf planet Ceres, which is located within the asteroid belt between Jupiter and Mars and does not exceed 950 kilometers in diameter, and like the Earth’s mantle contains large quantities of nitrogen and possibly water as well. .

This huge structure draws its energy from giant adjustable mirrors that reflect the sun’s rays into it, while at the same time protecting it from the risk of colliding with meteors. This is how the alternative habitat of Earth looks like, according to a report by the scientific site “Live Science”, according to the physicist Pekka Janhunen of the Finnish Meteorological Institute.

Inside each of these cylinders, there is an artificial atmosphere and gravity similar to the Earth’s gravity thanks to the centrifugal force resulting from its rotation, with an area that can accommodate about 50 thousand people, in addition to trains powered by magnetic lift linking the various cylinders.

But where will the materials needed to build this giant space station be available? According to the researcher, these materials can be supplied from Ceres itself thanks to a space elevator connecting it to the station, which will be easy to construct compared to Earth due to the low gravity of the dwarf planet and its rapid rotation around itself, This elevator is powered by the energy gathered by the vast fields of solar panels implanted on the planet’s surface.

The Finnish physicist promises us in these settlements urban and agricultural areas. The layer of soil transferred from Ceres will be 4 meters deep, which will be sufficient for planting plants and even trees. All without fear of extreme weather events or other natural disasters.

Through his plans, Pekka Janhunen was able – on paper at least – to solve a number of difficulties previously encountered by those who had imagined a human colony in the solar system, such as the problems of adapting to low gravity on Mars or on the moon, in addition to the problems of linking space colonies. Or the possibility of collision between those revolving around the offense itself.

Between science and fiction

This community, which resides inside cylinders swimming in space around a dwarf asteroid, may seem somewhat strange and a matter of imagination, but the idea is not new, rather it dates back to the beginning of the 1970s when the American physicist Gerard K. O’Neill put it in his book “Space Cities” is a complete depiction of human settlements in space, later known as “o’neill cylinders.”

Jeff Bezos – CEO of Amazon and founder of the private space company Blue Origin (Blue Origin) – also spoke in 2019 about the advantages of building “O’Neill colonies” similar to what Janhunen describes in this new study. But he was skeptical about the possibility of establishing such a colony in our lives, as the “Life Science” website reported, and he asked the audience, “How are we going to build O’Neill colonies? I don’t know and no one in this room knows.”

Although no techniques have been developed to date in the field of creating artificial gravity, or manufacturing space elevators and gigantic mirrors, not even protection against cosmic radiation, as well as the logistics needed to transport humanity beyond Mars, but Janhunen expects that humans will be able to establish This space colony is dreamed of about Ceres within the next fifteen years, and it will not take more than 22 years to build if these technologies are available, of course.

This idea looks beautiful and is based on scientific foundations like a previous idea that the physicist Janhunen proposed in 2006 to propel solar vehicles in space and provide energy to them, but between theory and practice there are distances.