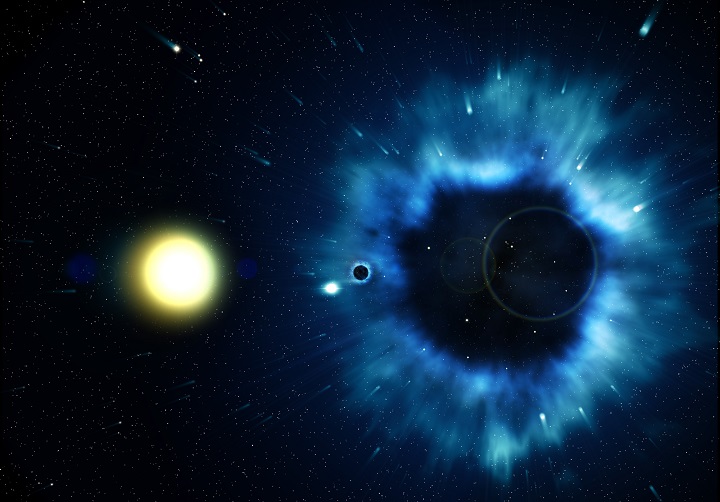 Astrophysicists have suggested that some of the supermassive black holes at the center of galaxies may actually be wormholes that connect two distant parts of the universe together.

In his theory of general relativity, Albert Einstein predicted the existence of wormholes, connecting two points in space or time, but they have not yet been discovered.

Experts of the Central Astronomical Observatory in Russia now believe that “black holes” in the center of some very bright galaxies (known as active galactic nuclei or active galactic cores), could be the entrances to these wormholes. 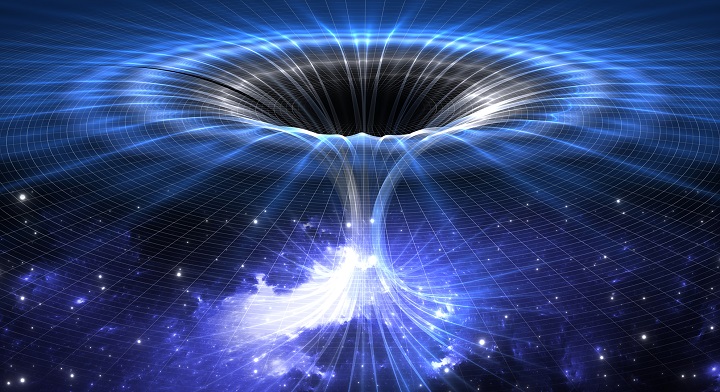 Worm holes and black holes are known to be very similar in that they are very dense and have very strong gravitational pulls on objects of their size.

The difference is that nothing can exit the black hole after crossing its “event horizon”, whereas any object entering a wormhole would theoretically exit from the other “side” elsewhere in the universe.

This collision will cause balls of plasma to expand from the wormhole’s “mouth” at the speed of light, at temperatures of about 18 trillion degrees Fahrenheit.

At such temperatures, the plasma would also produce gamma rays with energies of 68 million electron volts, allowing some NASA observatories – such as the Fermi Space Telescope – to detect the explosion.

The new study, published in the Monthly Notices of the Royal Astronomical Society, examines the type of energy and radiation produced by AGNs.

The closest AGN is located in the Centaurus A galaxy, which is about 13 million light years from Earth, in the constellation Centaurus.

Active galactic cores are usually surrounded by rings of plasma known as accretion disks, and they can emit strong jets of radiation from their electrodes.

The energy bursts produced by the accretion disks are not close to the temperature of the jets, which may be emitted from collisions inside wormholes.

However, the researchers suggest that if they find what appears to be an AGN that emits high-energy spherical gamma rays, it might not be an AGN at all but an entrance to a wormhole.

The researchers go further, noting that these wormholes are likely to be “passable,” meaning that spacecraft could theoretically travel through them.

Study author Mikhail Piotrovich said: “We must understand that we know very little about the internal structure of wormholes, and moreover, we do not know for sure if they exist at all.” He added that if humans were to travel one day to these distant galactic cores, they would open a new path for potential spaceflight or even a way to travel in time.

However, it is surrounded by intense radiation, and the closest one is 13 million light-years away, so it is unlikely that any human will be able to use one of it to travel the universe anytime soon.