Over the past years, a number of scientists have tried to monitor the disappearance of the black hole in the “Abell 2261” galaxy group, and made a number of assumptions.

The idea that has prevailed in the past few decades among astronomers is that every galaxy at its center is a giant black hole that swallows millions or perhaps billions of suns, and the bigger the galaxy, the greater The mass of a black hole.

A galaxy without a black hole

The surprise came a decade ago when Marc Postman of the Space Telescope Science Institute discovered a giant galaxy with no black hole at its center.

Usually in the nucleus of each galaxy there is an additional mass of light in the center emitted by twinkling stars that are gathered due to the gravity of the hole, but that galaxy that Postman discovered did not have the usual mass of light, and the nucleus, which is a cloud of stars with a diameter of about 20 thousand Light years away, wasn’t in the middle of the galaxy.

In 2012, Todd Lauer of the National Optical-Infrared Astronomy Research Laboratory in Tucson, Arizona, said, “This is not unusual at all .” In later years Postman, Lauer and a group of other scientists worked to monitor X-rays and radio waves emitted from the galaxy in order to find the missing black hole. 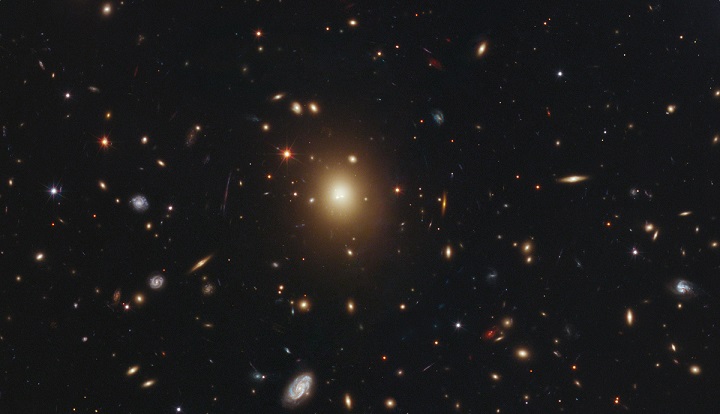 This galaxy is the brightest in the group of galaxies known as “Abell 2261”, and lies about 2.7 billion light years from Earth, inside the constellation Hercules in the northern celestial hemisphere.

Where could this giant hole disappear?

One of the possibilities is that this hole exists but is static, after it has temporarily run out of what can be swallowed, but Lauer and his colleagues made another assumption, which is that the black hole moved away from the galaxy.

A better understanding of black holes

Proving the validity of the latter possibility would provide a deeper insight into some of the most violent and dynamic processes in the evolution of galaxies and the universe, revealing more secrets about the gigantic forces and holes that can throw stars and planets into space.

Dr. Lauer belongs to a scientific team calling itself ”Nuker Group”, and over the past four decades this group has sought to monitor the nuclei of distant galaxies, using the Hubble telescope and other advanced equipment.

“What happened in (Abbl 2261) is roughly what happens with the most massive elliptical galaxies in the universe, at the end point of their evolution,” says Lauer.

In the 1960s, the discovery of quasars in the centers of galaxies led astronomers to believe that supermassive black holes are responsible for swallowing stars and producing light mass in the galactic core.

By the end of the century, astronomers had come to the conclusion that every galaxy contains a supermassive black hole, millions or billions of times larger than the mass of the sun, but there was no clear explanation for how black holes formed, whether they evolved from black holes, or It was formed in another process early in the life of the universe.

And in 1980, 3 astronomers, Mitchell Begelman, Martin Rees and Roger Blandford, wrote about how these black holes affected the evolution of galaxies. From their point of view, when two galaxies collide and merge together, which is a common event in the early stages of the universe’s life, the central black holes converge to form a binary system, consisting of two black holes revolving around each other.

Begelman and his colleagues found that these two enormous black holes interact with the constellation surrounding them, and from time to time one of these stars approaches the duo, but the forces of gravity push it out of the center, and over time, more stars push away from the center. Gradually the starlight spreads out to form a wider core, with little twisting in the center.

Assumptions about the location of the black hole

When observing the “Abell 2261” galaxy, Lauer and Postman had thought that they would find a density in the center as they have been observed in other galaxies. Instead, there was a decrease in the mass of light, as if the supermassive black hole and its accompanying stars had completely disappeared.

This discovery raised many questions about the scenario assumed by Begelman and his colleagues, as the two black holes merged from nothing, and the merger was accompanied by a tremendous surge of gravitational waves, and spacetime ripples like those predicted by Einstein in 1916, to be monitored by LIGO observatory devices a century later, specifically in 2016.

If this explosion were violent, as the previous theories assume, it would have caused the black hole to be sent to another place in the galaxy, or even outside it, something that the scientists who observed Apple 2261 did not notice, so finding the missing hole was very important To obtain an acceptable scientific explanation.

Further investigation of the elliptical galaxy (A2261-BCG) revealed 4 small nodes of light in a diffuse nucleus, raising the possibility that a black hole was hidden inside one of them.

To investigate, a team led by Sarah Burke Spolaor of West Virginia University observed the four nodes using the Hubble Observatory and the “Great Array of Observatories.” The team concluded that 2 of the nodes were most likely small galaxies and could not contain a black hole, while the third and fourth nodes were likely to contain the missing hole. 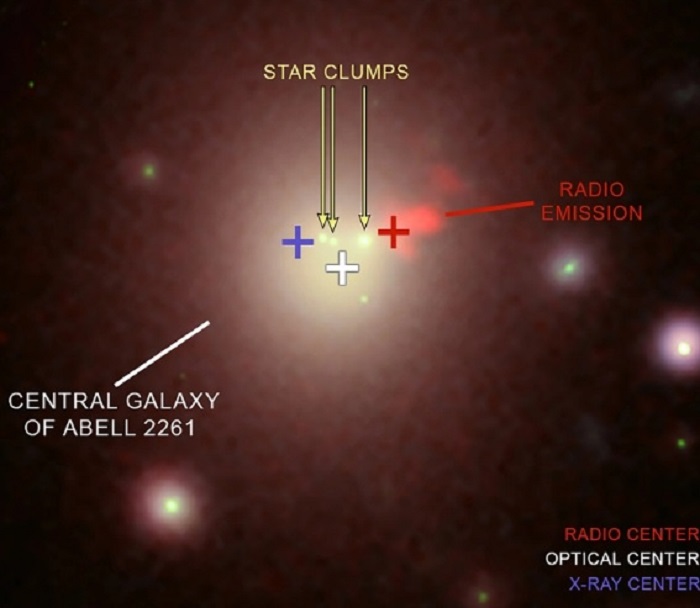 The next stop in an attempt to discover the secret of the missing hole was NASA’s Chandra X-ray Space Observatory. Kayhan Gultekin of the University of Michigan, a veteran scientist from the Nookers team, directed the telescope toward the core and the four nodes, and assured that a hypothetical black hole should feed at a rate of one out of a million of its normal energy, if it ever existed. “Either the black hole in the center is very faint, or it does not exist,” Gultekin wrote in an email.

Astronomers are impatiently waiting for the launch of the James Webb Space Telescope, the new observatory that will replace Hubble, which is scheduled to be launched at the end of next October, in order to examine the four nodes at the same time and determine whether any of them contains the missing black hole.